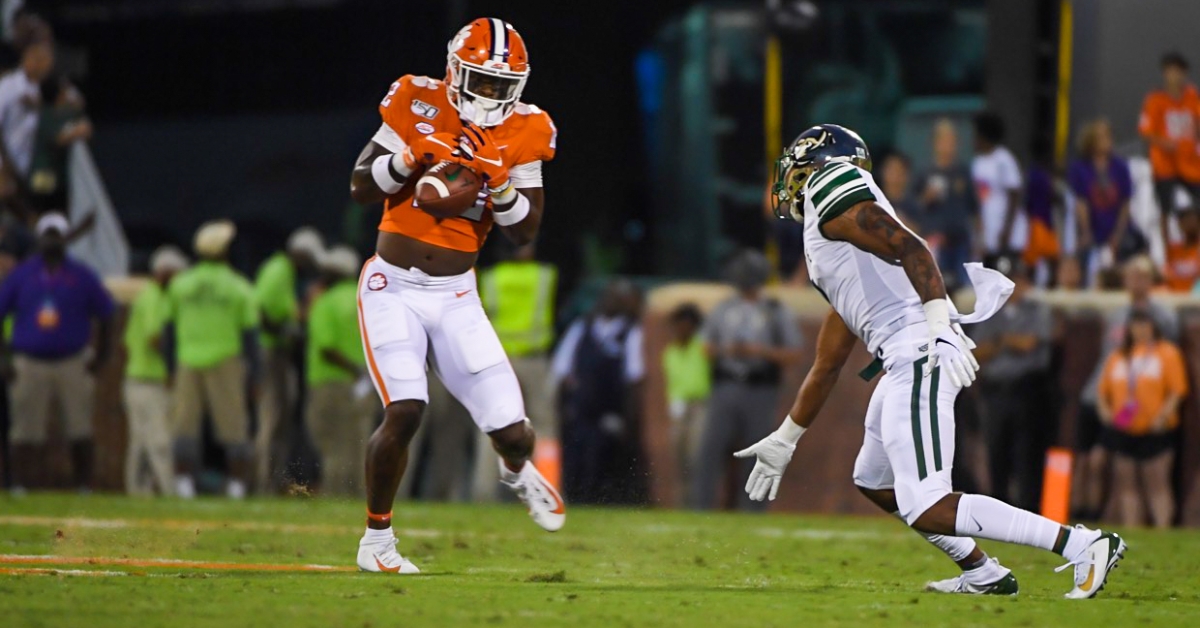 K'Von Wallace returned an early interception for a touchdown

CLEMSON – After three weeks of Power 5 opponents, a game against Conference USA’s Charlotte was just what the doctor ordered.

Clemson’s starters were afforded the chance to rest for two-and-a-half quarters as the Tigers beat Charlotte 52-10 Saturday night at Death Valley.

OFFENSIVE PLAYER OF THE GAME: Despite the mass substitutions early and often during Saturday’s game, Clemson’s offensive line was consistent throughout. The Clemson offense averaged 6.5 yards per rush and only gave up one sack.

DEFENSIVE PLAYER OF THE GAME: It’s extremely difficult to pick one player off of Clemson’s defense to give the player of the game to, so this week it’s a committee…Isaiah Simmons and James Skalski had six tackles apiece. K’Von Wallace had three tackles, two pass breakups and an interception that he returned 66 yards for a touchdown. Finally, K.J. Henry is beginning to make his presence known on the defensive line. He had two tackles but also had two pass breakups. I wouldn’t be surprised to see Henry’s role expanded over the next couple of weeks.

*Quick Start – The Tigers forced a 3-and-out by Charlotte on the game’s first series and it took just two plays for Clemson to score after the punt. Travis Etienne ran off tackle for a yard on the first play but Lawrence dialed up Tee Higgins on the second play. Higgins broke free down the left seam and took in Lawrence’s throw for a 58-yard scoring play. Early in the first quarter Clemson led 7-0.

*Defensive scores – The 49ers picked up two first downs on the ensuing drive, but K’von Wallace stepped in front of a throw by quarterback Chris Reynolds at the Clemson 34-yard line and raced 66 yards for the pick-six. It was the first interception return for a touchdown in Wallace’s career and Clemson led 14-0 with 10:24 to play in the first quarter.

STAT OF THE GAME: Clemson quarterback Trevor Lawrence completed 7-of-9 passes for 94 yards and two touchdowns, which means he had as many incompletions as he had touchdown passes.

Clemson played 110 players in Saturday's game, the most in school history.

UP NEXT: Clemson goes on the road to Chapel Hill (NC) to face the University of North Carolina in a 3:30 tilt on either ESPN or ABC. The Tar Heels have lost back-to-back games to Wake Forest and Appalachian State.

Charlotte will host Florida Atlantic at 3:30.