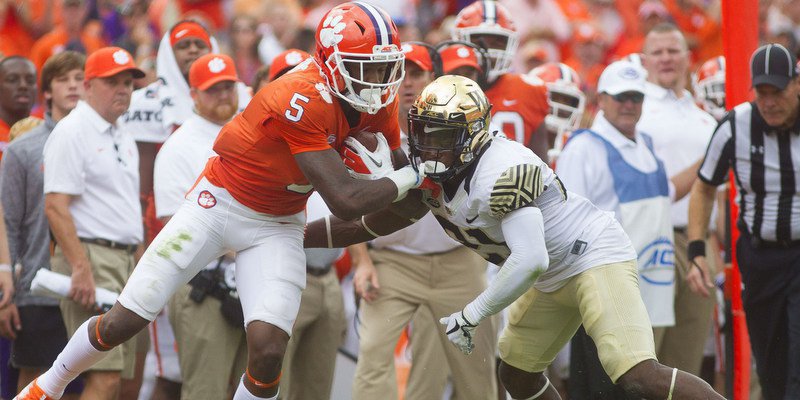 The first-team defense continued to play dominant football, not allowing a score through the game’s first three quarters, while the offense got off the a fast start but then bogged down until freshman quarterback Hunter Johnson led the Tigers on a 32-yard scoring drive after starter Kelly Bryant went down with a left ankle injury.

Clemson now owns 65 wins over Wake, the second-most against any opponent (they’ve won 68 against South Carolina). The Tigers have also won nine in a row in the series, all under head coach Dabo Swinney. The win was Clemson’s 11th consecutive overall, 20 of the last 21 and 37 out of the last 39. They’ve also won 21 out of their last 22 against ACC teams, 20 in a row against the ACC Atlantic.

Here are the quotes from both postgame locker rooms:

“I’m happy with the win. Wake Forest was a tough team to get ready for because they’re so deep and talented. I just like how we got ready throughout the week’s preparations, and we were locked in today and got off to a good start. One side of the ball was always there to pick the other ones up. We got control of the game early. I didn’t like how we finished, though, but we’re playing a lot of guys, and we’re committed to doing that. You have to let them experience growing pains. But I’m really proud of how we played today.”

On some of the key playmakers in the win:

“It seemed like guys on each side of the ball made great plays throughout, from Kelly Bryant completing 21 of 29 passes at quarterback on the offensive end to our pass rushers playing well on defense and guys making good plays in the secondary. Ray-Ray McCloud had a couple of big returns on special teams, too. It was just a well-rounded performance today.”

On his outlook for next week:

“We have another difficult test next week with a late game on the road. Since it’s a Friday game, tomorrow is like a Monday for us. We’re going to come in and practice tomorrow night and get ready for the next game. We have to take what we can from today’s win and build upon it as we continue to move forward.”

“First off, congratulations to Clemson. They really came out and played well, and they jumped on us early. I thought we then settled in defensively to keep us in the game; we made some big plays on offense and just never capitalized on it; we missed the short field goal and then the long field goal. Our guys battled hard, fought till the end. That is a really good football team, and we just have to play at a higher level than what we did. We missed too many opportunities early, missed too many tackles, and when we play a team the caliber of Clemson, you aren’t going to beat them.”

On this Clemson team vs. last year’s team:

“They were really good last year, and they are really good this year. The two tackles, [Dexter] Lawrence and [Christian] Wilkins, are excellent players, the two ends are very athletic; they can cover in the secondary, and they make you earn everything on defense. Offensively, No. 9 is really coming on as a tailback and is a big play maker for them, and when you combined that with the quarterback and the skill they have on the perimeter, there is nobody you can cheat against; they can beat you at every position.”

On having Kendall Hinton in at quarterback:

On what he learned about his team during this game:

“Well, we compete and play hard, but we still have to execute at a higher level. I don’t like to use a measuring stick, as it is a one-week season and we didn’t measure up this week to the team we played.”

Attitude towards the quality of the win:

“We are never upset about a win. You know how it goes; a win is win, and we are just happy to get out of here today with a W on the schedule, and the chance to keep proving what we are made of.”

On getting multiple players the opportunity to play:

“It tells guys that we have depth. It is fun going out there in the third and fourth quarter. I love showing my coaches what I can do and going out there and doing what some of the older guys have been doing.”

On gaining experience as a freshman:

“The first couple games, I was nervous. Now every time I catch a ball, my confidence just keeps going up, and the same when I make a big play. Coach [Jeff] Scott just keeps telling me to take it one rep at a time.”

Overall thoughts on the game:

“Wake Forest is a really good team. For us offensively, we just have to be more consistent. We started hot off out of the game, and then the energy level and the execution level came down. Consistency is what I’d say we need to work on.”

On getting off to a quick start:

“That’s something we didn’t do against Boston College, but something we feel like we’ve done away from home against Louisville and Virginia Tech. It helps the defense out, but the defense was lights out today, and it helped us gain a lot of momentum.”

On the lull after the first two scores:

“It’s a good trait to have, being able to come out hot, but it’s bad at times because sometimes we save our best performances for when we need them, like out of the game or before halftime. But that’s something in practice we have to improve on, we can’t depend on the defense to bail us out, and we just have to go attack every play like it’s the game-winning play.”

Overall thoughts on the game:

“It was a competitive game. This was not your normal Wake Forest team. They played really hard on both sides of the ball.”

On how Clemson’s defense adjusted when they found out Wake Forest’s normal starting quarterback was not playing:

“To be honest, the first two plays, I didn’t even realize that it was a different quarterback. It wasn’t anything different. We knew that both No. 10 and No. 2 were good runners. They didn’t deviate from the plan we had seen on film. It was just a different guy playing.”

On the team’s mental toughness:

“We’ve been through situations where we have faced adversity. It didn’t matter where they were on the field. If they got a turnover, or if they were in scoring position, we were able to respond. Whether it was stopping them on fourth down or having them miss a field goal, it was being able to bounce back.”