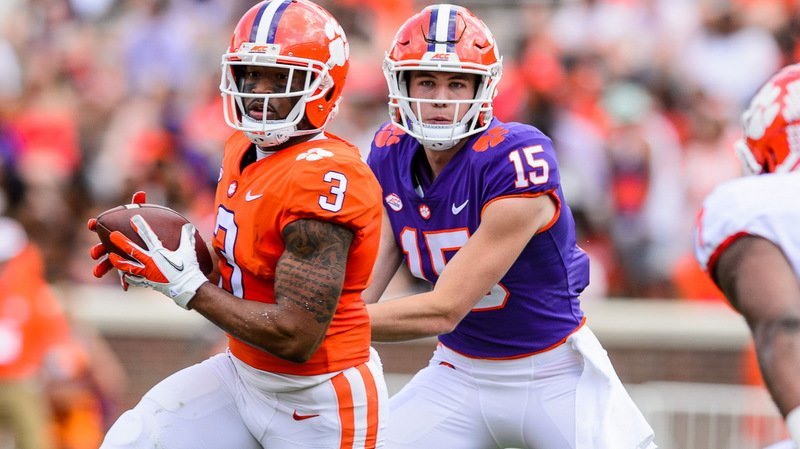 CLEMSON – While most fans are focused on a quarterback battle between incumbent Kelly Bryant and newcomer Trevor Lawrence, last weekend’s Orange and White game showed that Hunter Johnson shouldn’t be forgotten.

The sophomore signal caller completed 8-of-14 passes for 85 yards, a touchdown and an interception while splitting reps with Lawrence.

Johnson’s success on the field is a product of gaining confidence in limited reps during a freshman campaign that saw him go 21-of-27 passing for 234 yards, and hard work during the winter and spring.

“You know this whole spring, having a year under my belt makes a big difference,” Johnson told TigerNet after Saturday’s spring game. “I just feel a lot more comfortable having a year under my belt with the offense. Just being a step faster with my decisions, and being more confident about where I’m going. We were able to execute some drives and score some points and get the victory.”

It also didn’t hurt that Johnson had sophomore wide receiver Tee Higgins – who finished the game with four catches for 118 yards – at his disposal.

“Big day. He’s just one of those dudes. You kinda put it in his area code and he goes and gets it, that puts a lot of trust in us quarterbacks, to know that he can go out there and make a play,” Johnson said about Higgins impressive day. “All spring he’s been one of those guys, a go-to guy. You get a matchup, one on one, whatever the case may be, and we’re peaking his way,” he said.

With a long way to go before September, Johnson said there’s still plenty that he wants to work on during the offseason.

“I’m absolutely going to do everything this summer to improve my game, do what I can, and control what I can control. Be that player for the team, just make sure what we’re doing this offseason as a group is headed in the right direction,” he said.

“Just for me, I want to work on my footwork this offseason. That’s something that Coach (Brandon) Streeter has really been stressing on all of us, to improve our game in the run game as well as the passing. Footwork is going to be a big thing for me this offseason. It really kinda starts with your feet going up and then that slows everything down.”

However, he feels like he’s right in the middle of the quarterback competition with Bryant, Lawrence and redshirt freshman Chase Brice.

“I like where I’m at, it's competitive but it's making us all better. We all enjoy it, we all love competing against each other. It’s a good group,” he said. “I think the whole group has been very competitive this whole spring, they’ve been rotating all of us all spring with different routes, just really trying to get a look for everybody, rep wise. It’s been really competitive and great for all of us.”