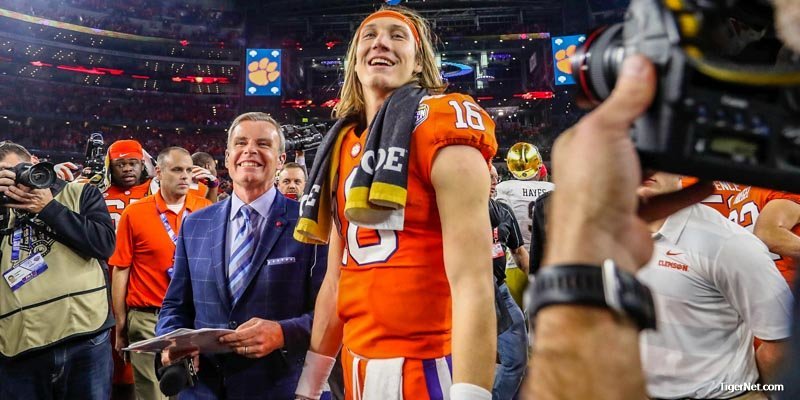 ARLINGTON, TX – A big question facing No. 2 Clemson before the Cotton Bowl centered on the relative youth of freshman quarterback Trevor Lawrence. How would the true freshman handle the bright lights and big stage of a College Football Playoff Semifinal?

Just fine, thank you very much.

Lawrence won offensive MVP honors with a 27-for-39, 327-yard effort that included three touchdowns and several other throws that were sure to make the NFL scouts in attendance drool. For Lawrence, however, it was just another day at the office and made sure to give credit elsewhere, especially his tall and talented receivers.

“There's a lot of them. You saw tonight. It's just -- those guys are unbelievable,” Lawrence said. “Just everybody on the offensive line, receivers, running backs, everybody. But they made a lot of plays. Just throw it in their area, and they'll come down with it. They did an awesome job, and it just shows how good those guys are. “

“And then Trevor [Lawrence] -- him and number 8 (Justyn Ross) got it going early. That was the spark that we needed. And the big plays were definitely the difference in the game,” Swinney said. “Notre Dame came into this game hardly giving up any big plays, and we were one of the leaders in the country in big plays. So really proud of Trevor and his poise and how he managed the game the whole way through. “

The Tigers were able to attack the middle of the field early and then took shots on the outside later, leading to several big plays. Lawrence said it came from film study and in-game adjustments.

“A little bit of both. They did a good job giving us some different looks than we expected because they had a bunch of time to prepare,” Lawrence said. “But I feel like we made adjustments well and just kind of saw that soft spot and took advantage of it.”

Lawrence then took the time to once again thank his teammates.

“It's just about this team. It makes it a lot easier on me when you have guys all around you that are just great players and take that load off of you,” he said. “So there's not much pressure when you have guys this good playing around you. So just that. And the coaches have helped me a ton, just helped me prepare and get me ready for all these situations has been really good.”

“I mean, to be totally honest with you, all I envisioned was him starting that next week against Syracuse. I thought he had earned that opportunity,” Swinney said. “I didn't have any vision beyond that. I really didn't. I'm a week-to-week guy. But, obviously, the situation changed. But I just think he's gotten better and better all year long.

“But I definitely envisioned him being a great player. There's no question about that. That's why we recruited him. I saw that back in the spring. And after four games I felt like he deserved to go start. And he gave us the best chance to win and play at an explosive level. He had great understanding and command of what we were doing. So my vision was for him to lead us that next week. And then, when things changed, well, okay, well now we'll see what he does for the rest of the year. And he just has done an incredible job. “

Swinney is also a fan of the humility Lawrence shows.

“[Brandon] Streeter has done a wonderful job with him as well. But he's just so poised. And he's 6'6". He just sees it. And he's got a gift of an arm,” he said. “But I just love his humility and how consistent he is with his demeanor and his preparation day in and day out. Easy, easy, easy guy to coach and easy guy to get behind and support. His teammates love him.”