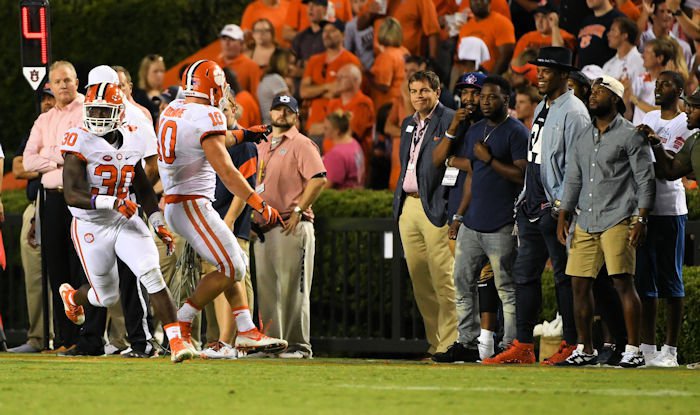 Boulware gives it his all on every play

Those descriptive words were used by defensive coordinator Brent Venables last week when he was asked to describe how he feels and thinks about senior linebacker Ben Boulware. Venables, normally reserved when it comes to the media, lit up when Boulware was mentioned, and he described his playmaker with a smile on his face.

“He's always been a bull in a china shop. That's why we played him as a true freshman,” Venables said. “He was always full speed and that throttle he had - there was idle, and then there was just all the way down. Jamie Skalski is kind of like that. That has always stuck out to me.”

Venables first met the Hanna product when Boulware – deemed not worthy of an offer by former defensive coordinator Kevin Steele – came to campus for an official visit. Venables wanted to make an official offer, but Boulware was too mad to understand what was happening.

“Another thing is how mad he was on his first visit over here on our campus, officially,” Venables said. “We were like, ‘Ben, we need you to come over’ because we were going to offer him. I remember just how mad and chippy he was. Usually, guys are ready to wet their pants when they know they are going to get an offer. He came over here, and was like, 'What? What? Where have y'all been? I came to camp.' I told him I knew, but I wasn't here. He said 'Yeah but you wanted somebody else.' And that is kind of who he has always been.”

Linebacker Kendall Joseph says his first impression of Boulware came from a fight.

“We used to play each other every year, and we got in a fight my sophomore year, when he was a junior,” Joseph said. “They came over to B-HP, and he tried to slam me and push me and they had to pull us apart. Then my junior year we traveled over to T.L. Hanna and we were doing some kind of punting drill. He was on the edge and I was the punt protector. I saw him coming and he tried to jump for some reason. I was already low because I am short, and he was cussing me out and was accusing me of trying to take out his knee. Two years in a row we went at it. But I think he has calmed down since high school. He was mellowed.”

Venables said Boulware is always on, even in the meeting rooms.

“We had a meeting yesterday, and he is so invested. We had an adjustment that we are making to a certain formation, and we discussed it six or seven days ago,” Venables said. “And since then, we slightly tweaked it. And he remembers that very first adjustment, and he wants to get into a full-blown argument and is looking at his notes And he is so invested, he wants to have it down pat and wants to have no gray area. If you were there you could appreciate it more than I can mimic. And since he's been here, he has been totally invested and he's wanted success in the worst way.”

In other words, Venables sees a lot of himself in Boulware.

“HIs commitment matches his goals. He is what you want your guys to be about - tough, passionate, full throttle, and emotional,” Venables said. “People feed off of that, and it's very natural to him. We are like this in a really good way. I will get after him, and I know he will explode and all of a sudden I have everybody's attention. From a competitive standpoint we are very, very similar.”