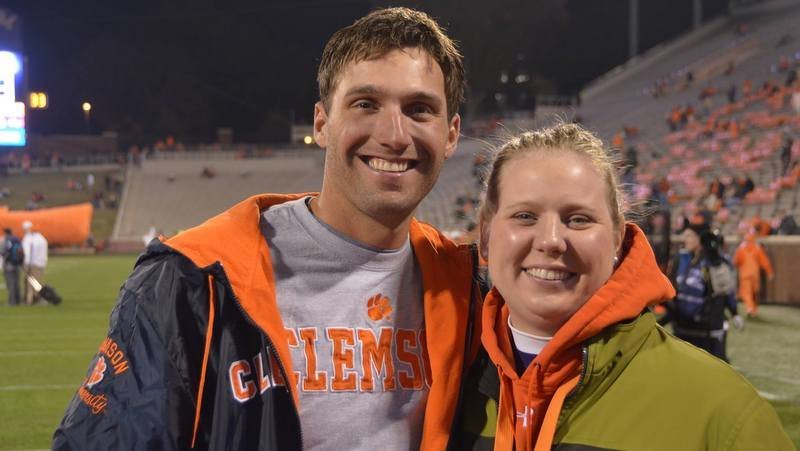 Clemson is still a big part of Jeff Francoeur's life

Jeff Francoeur is a big fan of Clemson sports. He isn’t ashamed to admit it and doesn’t care who knows it, especially in his home state of Georgia.

Francoeur was selected by the Atlanta Braves in the first round of the June 2002 amateur draft. Francoeur was a 4-star safety prospect that had committed (in July of 2001) to play football at Clemson. After the draft, he elected to forego college to play baseball.

Francoeur spent parts of 11 seasons in the Major Leagues after making his Major League debut for the Braves on July 7, 2005. He is now an analyst for Fox Sports and called the ACC Baseball Tournament in late May. He is currently working on Braves broadcasts with Chip Caray and Joe Simpson, and he told TigerNet he loves his new career.

“I think about three years ago, I was still playing but I realized that I was getting towards the end of my career and it was something I had always thought about doing,” Francoeur said. “I'm a pretty good people person and had met enough people from Joe (Simpson) to Chip (Caray) to have pretty good relationships. I thought it was something I definitely wanted to get into.

“I have a five and a two-and-a-half-year-old now and one more on the way and it was something for me that I wanted to be home and with this kids. It was a good opportunity so I've just kind of started to dive into it and I'm enjoying. Calling a ballgame instead of playing in a ballgame is a lot more stress-free.”

“Calling a ballgame is a lot easier than playing,” he said with a laugh. “You already have all of the information and sometimes it's just knowing where to look. I'm lucky that I've had so many people help me out. I want to learn and be really good, so I learn, and I take criticism. I want to know what I'm doing good, what I'm doing bad and what I need to work on.”

Francoeur grew up a Clemson fan, but it was his relationship with Tommy Bowden that sealed the deal.

“It was just recruiting and getting to know Tommy (Bowden). It was just one of those things that if you think about the way Jack (Leggett) and Tommy were, they were so easy to deal with and great to be around,” he said. “I grew up going to some football games at Clemson. My dad used to take me to some of the Georgia games and others. We'd just go see football games, so I always liked the campus. When I went there and saw the facilities, I just knew it was the perfect fit.”

Then came the offer from Braves.

“I was within four days of two-a-days, but at the end of the day, I knew that baseball was what I wanted to do,” Francoeur said. “It was so funny because I remember when I signed and called Coach Bowden, he was like, 'Listen, I'd punch you if you didn't sign and go do that.' He was great about it.

“I ended up having such a great relationship with Tommy over the years and the same thing with Jack, and then Ron West - who recruited me under Tommy and went on to coach with Dabo - I just got to have a relationship with Dabo, too. I just kind of kept everything open. I think they've always been so awesome to let me come back and be a part of stuff.

“During the ACC Tournament, Monte (Lee) let me come out to practice and hang out. I wasn't a media guy yesterday. I was just a guy hanging out, watching practice and enjoying myself. Those guys have always been so welcoming to me. It's the same thing with Dabo. Going to games and the national championship. Tracy (Swinney), I love him. It's just developing relationships with good people and I like being a part of it.”

“It's just the way they go about things. They're good people and I love it,” Francoeur said. “It's great. My wife went to Georgia and I wanted a Clemson-Georgia national championship so bad. I ended up having to go to the national championship anyway, even though it hurt after the Sugar Bowl.

“I've gone to all of them (College Football Playoff games) and the Sugar Bowl last year. The national championship was great, but more than anything, I think it was cool to see this past year after we lost to Syracuse, because I probably would've lost my house if I would've bet on that game. I'm glad I didn't. To see the way they came back and how gracefully they handled it. You look at what Jack did over the years and he did a great job, and now you look at Monte and what has done, it's a great time. The basketball team was really good. It's a great time to be a fan.”

Francoeur is already looking forward to the 2018 season.

“I think it's going to be great. People want to talk about the quarterback, but it works itself out all the time,” he said. “The best is going to play and it will work itself out. I think Kelly Bryant had a great year last year, but I think he has to work on his throwing. At the same time, he's got the experience that Trevor Lawrence doesn't, so he's got that going. Either way, we're blessed to have two freaking really good quarterbacks.”