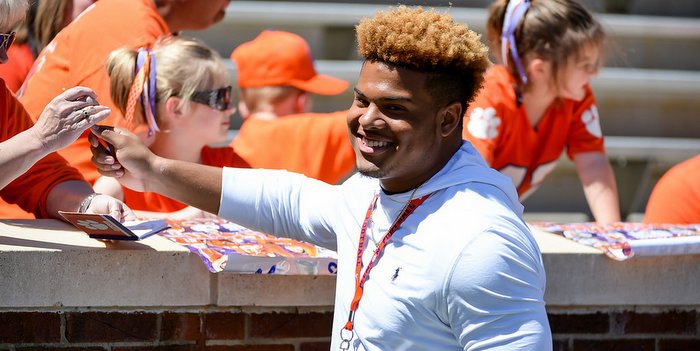 Thomas shows his charisma at the spring game two weeks ago

Xavier Thomas and his IMG Academy teammates start spring football practice this week, meaning that Thomas the 5-star defensive end can take a break from being Thomas the 5-star recruiter. At least for a few days.

But don’t expect him to stop for long.

Thomas committed to Clemson before the spring game two weeks ago, and he’s been busy playing the part of recruiter since then. When pressed on why he chose Clemson – and why other recruits should make the same choice – he was direct and to the point.

“Clemson is just a special place. Every time I come here I feel like I am a part of the family,” Thomas said, “I love the campus, and I have a great relationship with the coaches, But the main reason I chose Clemson is because I want to be a part of something special. You can win championships at Clemson, and I want to be a part of that. I know that with guys like Trevor Lawrence and Mike (Jones) already on board, we have a chance to be great. This class has a chance to be all-time special, and it's something we all talk about. I am trying to convince all of these guys to come here and be a part of something that is really special.”

Thomas was ranked No. 1 overall in the rankings that were released, but he chose to not dwell on what that might mean – he is more concerned with trying to draw in other top talent to the foothills of South Carolina. During the broadcast, he named fellow five-star recruits Patrick Surtain, Anthony Cook, Jamaree Salyer, Jackson Carman and Zamir White as players he is working on.

I wonder how pumped Clemson fans would be if I got my bro KJ Henry @ywd_ballislife to come with me to Clemson ?????? #ALLIN #WE2DEEP18

Happy birthday bro @SurtainJr btw you know what to do when the time comes ????????