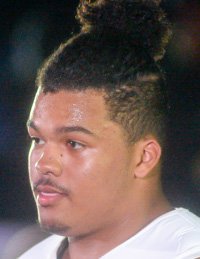 Offensive Line
B I O
One of the top players regardless of position in the nation…one of five finalists for USA Today National Offensive Player of the Year, quite a distinction for an offensive lineman….first-team USA Today All-American…one of the top 20 players in the nation by all recruiting services…ranked 12th overall and the No. 1 offensive tackle and No. 1 player in Ohio by ESPN.com…ranked 14th overall, first in Ohio and first among all offensive tackles by Rivals.com…247sports lists him No. 20 overall, the second best offensive tackle and the top player in Ohio…US Army All-American who is a finalist for the Anthony Munoz National Lineman of the Year…played his high school football for Jason Krause….selected Clemson over Ohio State and Southern California….announced he was signing with Clemson on signing day, December 20, 2017…recruited by Clemson offensive line coach Robbie Caldwell