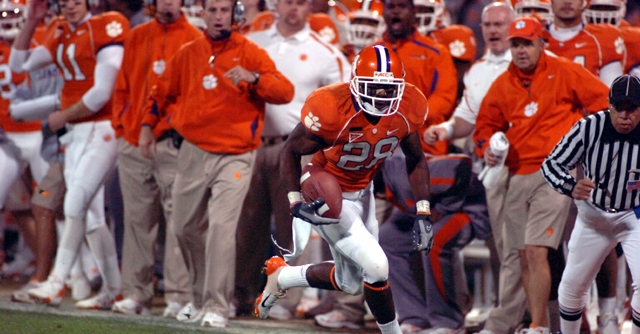 Swinney is in the background of this picture from that 2007 game, intensity for all to see.

If you’re a Clemson fan and your fanhood goes back longer than the current run (you know who you are), the night of November 17, 2007, is burned into your memory. The weather was perfect for college football, the crisp fall and night air providing the perfect backdrop for a sold-out and rocking Death Valley.

An announced crowd of 83,472 orange-clad faithful squeezed into Death Valley for the game. I was working for the Greenville News at the time and was covering Wofford on a weekly basis. The Terriers defeated Chattanooga a week earlier and had an open date in advance of the Division 1-AA playoffs. One of the Boston area papers needed someone to write a sidebar for the game, and I made my way to Death Valley for the tilt.

I arrived later than I wanted to arrive and wound up parking right where the new football operations center sits now. I traipsed into the old press box (which I miss because it had room) and watched history unfold.

Clemson put together an early drive that covered 68 yards in 13 plays, with James Davis bowling in from a yard out to give the Tigers a 7-0 lead. Boston College added a field goal before the half and Clemson took a 7-3 into intermission.

A 12-play drive in the third quarter allowed Clemson to reach the Eagle five-yard line, but the Tigers had to settle for a 22-yard field goal from Mark Buchholz and a 10-3 lead after three quarters.

What followed was a fourth-quarter full of chaos, mayhem, excitement, and disappointment.

Boston College scored 10 points in the first six minutes of the final stanza to take a 13-10 lead. James Davis returned a short kickoff 13 yards to the 44-yard line, and the Tigers put together a 10-play drive that ended with a four-yard run by quarterback Cullen Harper. With 5:28 left on the clock Clemson held on to a 17-13 lead.

On BC's winning drive, Ryan completed a 12-yard pass to Clarence Megwa on third-and-8 that kept the drive alive. Five plays later the Eagles faced another third down, this one a 3rd-and-7 from the Clemson 43-yard line.

This is where Dabo Swinney, for me, comes into play.

Writers and media types are allowed to leave the press box and watch the final four, five, or six minutes of the game from the sidelines (depending on the stadium and league). These days, I don’t usually get to take advantage of that because we post a game story as soon as the game ends, so I am usually in the press box until the final seconds tick off the clock.

On this day, however, I was writing a sidebar and I headed down with the first wave. I went down to the 25-yard line on the WestZone side of the home sideline to watch the final drive unfold. On that third down, I saw Swinney for the first time. I had no idea who he was – I didn’t cover Clemson on a regular basis and had only spoken with the coordinators and head coach Tommy Bowden. Swinney was meeting with his receivers but kept an eye on the big board, and I could tell by the intensity on his face that he was living and dying with each play by the Eagles.

With the Death Valley crowd at full throat, I saw BC’s Rich Gunnell slip out of the backfield uncovered. As Ryan delivered the pass, the ball seemed to hang in the air for an eternity and the stadium went from a roar to silence in a split second. Gunnell gathered in the pass and scampered the final few yards into the end zone for a 20-17 lead.

As Gunnell scored, I turned to watch the bench and saw Swinney grimace, then slap the play sheets in his hand and bark instructions to his receivers. Who is this guy, I wondered?

There was still 1:46 to play, but a pass slipped of the fingertips of receiver Aaron Kelly, and later in the drive, Harper took a seven-yard sack that led to a 4th-and-14 from the BC 37. The Tigers elected to try a 54-yard field goal by Buchholz but the attempt fell short of the crossbar.

As the Eagles and the Clemson fans stormed the field, I stepped off the sideline and almost ran over Swinney. He was down on one knee, picking blades of grass, and his jaw was clenched in frustration. He finally tossed down the blades of grass and walked towards the midfield handshakes.

I later asked about this coach and was told some of his story. On the ride home that night, I told someone that there was something about Swinney that struck me with force. He had some indefinable “it” factor that made you drawn in his direction.

Just a day over 11 months later, Swinney was named as the Tigers’ interim head coach. At his introductory press conference, I slipped in the door and stood at the back door as Swinney said, “I am excited about a fresh start around here. I am excited to see what we can do from this point on. I am going to do everything I can to make Clemson proud. You are looking at a coach that has nothing to lose.”

His press conference was impressive, and I wondered if I would have the chance to cover the transition. Why? Because I was talking to the owners of TigerNet about coming on board as a full-time writer and covering Clemson full-time. I like to tease Coach Swinney that we started at the same time but no one remembers my anniversary (as it should be).

One of my first columns (I didn’t write the headline) wondered if Swinney would be given an opportunity to succeed, saying that I wasn’t entirely positive people would move past anyone with a connection to Bowden. The headline – which I didn’t write – didn’t really relay that fact and some would later say I was against the hire.

Not the case. I had noticed him 11 months earlier and for some reason, that first impression has always resonated with me. I’ve sat in his home and told him the story and we’ve laughed about how far the program (and Swinney) has come.

This ride we’ve all been on has been incredible, and for me, it all starts on a chilly night and a heartbreaking loss to Ryan and the Eagles. There would be more losses and more heartbreak and I would sit back and watch the growth of a coach. And as the weeks go by, we have time to delve into all of those memories and I hope I can bring them to you. The good times, the bad times, the wins and the losses.

And it’s all been quite a ride.