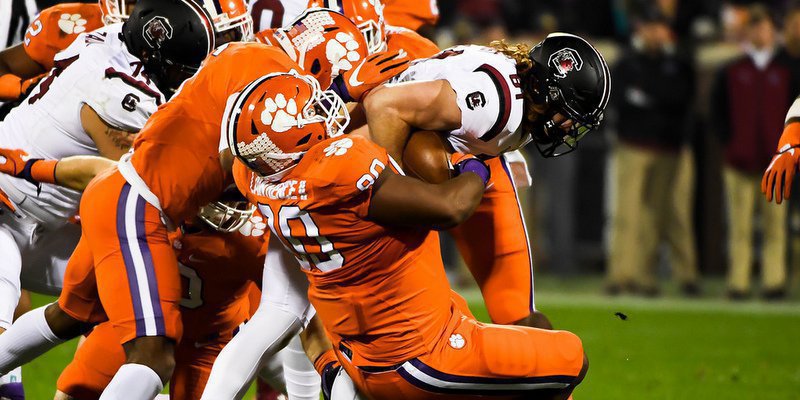 Dexter Lawrence and company should be good again this season

The ACC’s annual kickoff event for the media, coaches, and players gets underway Thursday morning at a hotel in downtown Charlotte, and talk of Clemson’s National Championship will fade into the rear view mirror as talk about the 2017 season dominates the conversation.

The ACC sent out preseason ballots to the conference media Wednesday afternoon, with writers given a chance to vote on the preseason all-conference team, pick division winners and a conference champion. There is little doubt in my mind that when the results of the voting are released next Monday that Clemson will have some votes, but Florida St. will be the pick to win both the Atlantic Division and the conference championship.

I sat in front of my ballot for the longest time – the players were easy to pick, and yes I gave Mitch Hyatt and Deon Cain and Dexter Lawrence first-team consideration – but picking where I think the teams will fall in their respective divisions and picking a champion proved harder.

The choice was easy the last two years. A Clemson team with Deshaun Watson at the helm was a no-brainer pick for me. I’ve had the entire offseason to try and guess where Clemson will be this season, but a sure answer has eluded me. There are times when I’m too pessimistic for my own good. I’ve told Nikki I can see a situation where this team loses four games. I can see a situation where this team runs the table or loses just once. There are some unknowns that make it hard for me to gauge what kind of team this will be.

I have a good friend who is the eternal optimist, and he sends me a missive at the beginning of each season that has 2000 words in it, and he tells me why Clemson is ten times better than any team the Tigers play. Clemson could be down to one scholarship offensive lineman, a walk-on quarterback, nine freshmen starting on defense and a running back transfer from Delta Community College (if it existed) and he would still pick his team to go 12-0.

Dexter Lawrence and company should be good again this season "

I don’t have that luxury – I want to bring you the Clemson news, but I also want to be as objective as possible. If the offense or defense are struggling, I have to be able to tell you why I think that is. I have to be critical at times, and even though sometimes the fans don’t like it I have to stay true to myself. That’s why I can say I see a scenario where this team struggles at times.

Nikki and I have been spending our evenings walking around campus, and the quiet walks have allowed both of us to go over every position on the team, and it’s allowed me to finally verbalize everything I’ve been thinking. And I’ve come to a conclusion, which is different from others in my profession. It’s just going to take the rest of them a little longer to see it.

This team is going to be really, really good. Again.

I know, there are question marks at quarterback and running back and tight end on offense, and it will be hard to replace the production of Watson, Mike Williams, Wayne Gallman and Jordan Leggett. But that’s why you recruit. That’s why you go out and develop guys, guys who can step in and play. It’s like this – Milan Richard has the potential to be the real deal at tight end. He knows the offense and he looks the part. He simply had a great player in front of him. The same can be said of wide receiver Deon Cain, who has looked terrific in summer workouts.

The running backs are pushing each other to be better and will be the surprise in the league this season. Quarterback? I’ve heard nothing but great things coming out of summer workouts, and almost every school in the country would love to have Clemson’s “problem” at quarterback. This offense is going to be just fine. They will score points – maybe not as many as last season – but they will score enough and Clemson fans will see a different game this year.

Special teams will be better. A lot of the issues were fixed last season, and Greg Huegel returns as one of the league’s best kickers. The punting game should improve.

And that defense? One of the best if not the best defensive line in the country. Hands down. Kendall Joseph will move over to the WILL linebacker spot manned by Ben Boulware last year and there will be no drop-off. Tre Lamar will be the man in the middle and there will be no drop-off. Dorian O’Daniel is a veteran presence on the other side. That front seven will swarm opposing offenses.

The secondary has the steady hands of Van Smith, Marcus Edmond and Ryan Carter and talented youngsters like Trayvon Mullen, Mark Fields, K’Von Wallace, Isaiah Simmons and A.J. Terrell. Once you sit back and really look at this roster, it all becomes clear.

Baseball coach Monte Lee likes to talk about those special players – difference-makers – and he calls them “dudes.” Clemson lost a lot of dudes from last season, but there are some dudes ready to step in and make their mark.

The ballots won’t show it, and that’s ok. Championships are decided on the field, not in the media. Right, Alabama?