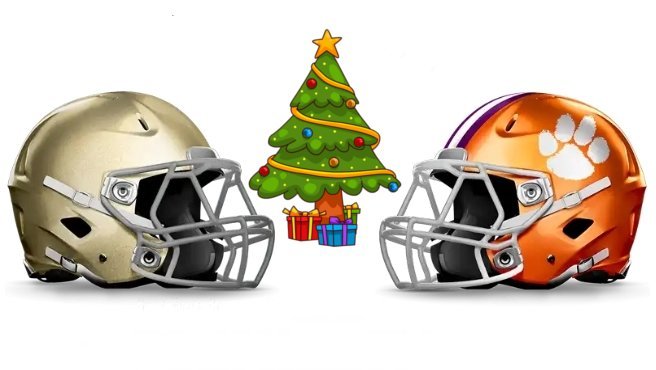 CLEMSON – It sucks, but it’s the norm.

No. 2 Clemson will spend the Christmas holiday away from home. The Tigers arrive in Dallas to prepare for next week’s Cotton Bowl on Sunday and will even practice on Christmas Day. It’s not ideal, but when you’re with you’re extended Clemson family, it makes it better.

“You know, it sucks. There is no other way to describe it. It sucks,” Tremayne Anchrum said. “But at the same time, Christmas is about being with family and people that care for you. It also means the spirit of giving, and nothing describes our team better than that. Yeah, you are away from your family and you’re not home like you’re used to being, but you are experiencing something new and special that you will cherish.”

Tight end Milan Richard said he’s used to being away from home this time of the year.

“We are used to it. It’s kind of our norm now,” Richard said. “I think I’ve been home for Christmas maybe one time in the last four or five seasons. It’s cool. We get a little break and we will see our family and then we’ll spend Christmas together as a team. It’s all cool, though. I am used to this and Christmas is still my favorite holiday.”

Wide receiver Tee Higgins’ mother is not thrilled with the earlier game date.

“It’s not going to be bad. My mom is pretty upset about it,” Higgins said. “She understands, though. She knows we are going there for business. We have something to do and something to prove.”

Wide receiver Amari Rodgers is another younger player that isn’t used to it.

“It will definitely be different. I’ve never spent Christmas away from home,” Rodgers said. “But we have a full-pads practice that day so it will be different. We just have to focus in and take care of business.”

Isaiah Simmons flew home to Kansas during the three-day break for an early Christmas but doesn’t mind spending the 25th in Dallas as long as it’s for a good reason.

“This is probably my first time not being with my family at Christmas. Ever,” Simmons said. “But this is for a good reason. That is the way I think of it. Maybe at some point I can get away with my family and we can do Christmas then. Coach Swinney mentioned something about going to the Mavericks game, but other than that I don’t really know what we will be doing.”

Safety Tanner Muse wishes the bowl games would make it easier on players and coaches.

Center Justin Falcinelli said the players will depend on each other.

“It happened my redshirt freshman year when we were in Orlando (at the Russell Athletic Bowl). So I am used to it and I know what it's like," Falcinell said. "Not a lot of the guys have been through that. I know what to expect, and it's tough, but you are with your Clemson family so we all have to rally around each other."

Offensive lineman Gage Cervenka’s family will make the trip to Dallas, easing the sting of being away from home.

“It will be alright. My family is coming down there,” Cervenka said. “We’ve been in the College Football Playoff the last few years, so we’ve been able to go home for Christmas but came back the day of Christmas. It’s a little bit different that I am not there on Christmas, but I am getting to experience something that not a lot of people ever get to experience. This is a once in a lifetime event. I am excited. This is one of those things I will get to tell my children about. Plus, I get to spend it with my teammates so I am not too worried about it.”

“I don’t know that I’ve been home for Christmas since I’ve been in college. I usually leave the home the day before to come back. My family is used to it,” Pollard said. “We’ve done Christmas a day or two before. And my family will be out there a few days after Christmas, so it won’t be too hard and there won’t be that much time in between seeing them. It won’t be that hard.”