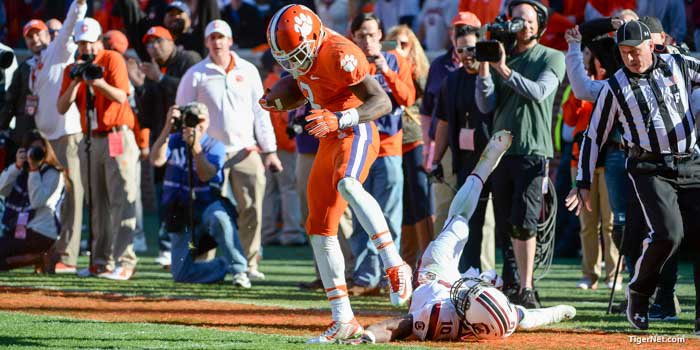 Clemson and South Carolina will renew acquaintances Saturday afternoon in Columbia’s Williams-Brice Stadium, a venue that hasn’t seen a Clemson win since 2007. That will likely all change this weekend when the top-ranked Tigers and Dabo Swinney’s most talented team take on a 3-8 South Carolina program that is still reeling from a 23-22 loss to The Citadel this past weekend.

What a difference two years can make.

Two years ago, Clemson left Williams-Brice Stadium reeling from a fifth consecutive loss in the series, and many would have told you the programs were headed in opposite directions. They were right.

That season, I thought the Tigers would beat South Carolina in Columbia. I thought Clemson was more talented in that game and that the rivalry was about to change. Swinney had spoken to the members of the media more than once about having patience and how rivalries are cyclical. He pointed out that the auguries were pointing to the Tigers breaking what was then a four-game losing streak.

And then – a first quarter interception thrown by Sammy Watkins. The inexplicable abandonment of the running game. Six turnovers. Four turnovers in the fourth quarter alone. The score was tied at 17-17 in the fourth quarter when a comedy of errors ensued that ensured a fifth straight loss. There were head-scratching offsides plays. The turnovers. Mistakes. Penalties.

That fourth quarter? Defensive end Chaz Sutton ripped the ball from Tajh Boyd's arms with the Tigers driving for the tying score deep in South Carolina territory down 24-17. When Clemson forced a punt moments later, Adam Humphries fumbled the punt back to South Carolina. That's when a Pharoh Cooper pass to Brandon Wilds caught the Clemson defense off guard and put the game out of reach.

"Just give them credit. We never had six turnovers before," Swinney said. "That wasn't part of the script."

South Carolina head coach Steve Spurrier – who probably figured he would be a part of the rivalry for more than one more season – put it even more succinctly.

"They're a good team that continues not playing very well against us," Spurrier said.

We walked into the tunnel underneath Williams-Brice for the postgame interviews, and Swinney looked pale, washed out, out of answers. He spoke briefly with Athletic Director Dan Radakovich and I heard him tell someone else, “We’re the better team. We just didn’t play like it.”

As Swinney settled into the small, dingy room reserved for opponent’s head coaches, I avoided the crush inside the room and waited for players and coordinators outside the room. It was then I noticed one of Clemson’s defensive coaches sitting on a bench, staring off into space. He nodded, I said something that didn’t even come close to helping, and he muttered, “I just don’t get it.”

The Tigers had outgained South Carolina and beaten them at the line of scrimmage, but the six turnovers and the costly mistakes meant that the Gamecocks were mentally tougher at crunch time. It wasn’t just the coaches that didn’t get it – nobody that wore orange that day or in the weeks after could fathom what had happened. Again.

If you had asked fans from either team that night what they thought the future would hold for their program, you might have gotten vastly different answers. South Carolina was at the end of three consecutive 11-win seasons and would beat Wisconsin in the bowl game. Confidence was high, and many would have thought the program would win six, seven or even eight straight against the Tigers.

And then a funny thing happened along the way. Clemson kept recruiting. Kept following the lead set by Swinney. The Tigers won the bowl game against Ohio St., and like South Carolina lost plenty of talented players to the NFL. And kept on winning. Since that fateful night in Columbia, the Tigers are 22-3. The Gamecocks are 11-14.

Spurrier is long gone, running out on his team when they needed him most, taking his quips and his barbs and narcissism into the world of television, tucking his tail and running at the first sign of trouble. Swinney didn’t run at the first sign of trouble. Or five signs. He stayed the course, and now is the darling of the national media. He’s everywhere. And he will take his number one Tigers into the house of horrors known as Williams-Brice this Saturday as the heavy favorite.

Twenty four months ago the Tigers left that stadium full of questions. Now they seem to have all the answers, and the Gamecocks are the ones with all the questions as they look for a coach and someone to lead them out of the depths of a 3-8 season.

Maybe the Tigers lose. Maybe the perfect season ends and South Carolina finds a fitting way to end an otherwise dismal season. Swinney still won’t run, and he won’t make excuses. That’s what coaches with programs that are built to sustain success do. They sit in the dark after heartbreaking losses, they soul search, and they go back to work. And they succeed.

Clemson will more than likely win, and will head into the ACC Championship Game in early December needing one more win to qualify for the College Football Playoff.

What a difference two years makes.