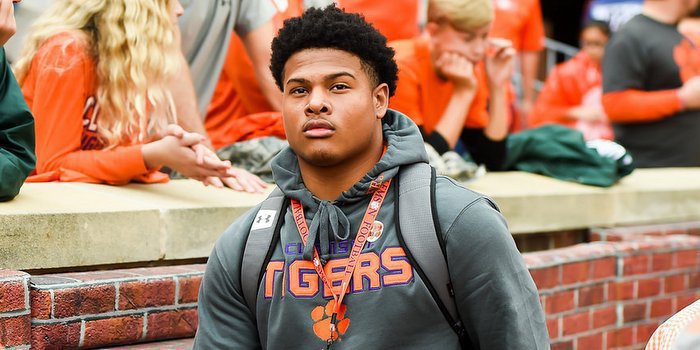 The scouting services might disagree on who the number one player in the 2018 recruiting cycle happens to be, but everyone can agree that the Clemson coaching staff is building on the momentum of a National Championship and assembling a monster class.

The news broke early Saturday that 2018 defensive end Xavier Thomas gave his verbal to the coaches on a visit for the spring game. Thomas’ commitment gives the Clemson's staff its seventh verbal commit in the 2018 recruiting class and the second from a 5-star.

How good is that? Only Clemson and Alabama have signed at least three 5-star prospects in each of the last three years, according to Rivals.

That’s right, the Tigers have arguably the nation’s two best players in the 2018 recruiting cycle committed. That’s how championships are made. And, did we mention that Laurinburg (NC) Scotland County 5-star running back Zamir White is on campus this weekend, and he’s listed as a top five player overall by those same services?

Back to Thomas – he grew up a fan of South Carolina and was considered a lean to the Gamecocks throughout the recruiting process. A few months ago, he announced that he would make a decision on his birthday in December, and narrowed his choices down to Clemson and South Carolina despite having offers from coast to coast.

He’s made several trips to South Carolina in recent weeks, but a move from Florence to Bradenton’s IMG Academy put him in contact with Clemson commit Mike Jones and Clemson legacy Stephon Wynn. Last week, the IMG prospects were in Columbia for South Carolina’s spring game, and we heard that Thomas began to cut off communication with the South Carolina coaching staff after the visit and he began to trend towards Clemson mid-week.

What does Clemson get in Thomas? A 6-3, 269-pounder who has the power to bull-rush offensive linemen but also has the speed to beat them off the edge. At a recent ESPN Scouting Combine, Thomas ran a 4.58-second 40-yard dash that was best out of all the nation’s defensive ends.

Is that fast? For reference, former Clemson running back Wayne Gallman ran a 4.57 40-yard dash at the NFL Scouting Combine.

We will have more later on Thomas, but needless to say Clemson’s recruiting is off the charts, and the Tigers may not be done this weekend.

Biggest decision of my lifetime, my recruitment is OVER. I'm 100% ALL IN ?????? This is only the beginning #WE2DEEP18 @ETitusThomas pic.twitter.com/RQJ7tr32BY

Making one of the best decisions of my life baby ?? We liveee https://t.co/OTVq0SSPx0