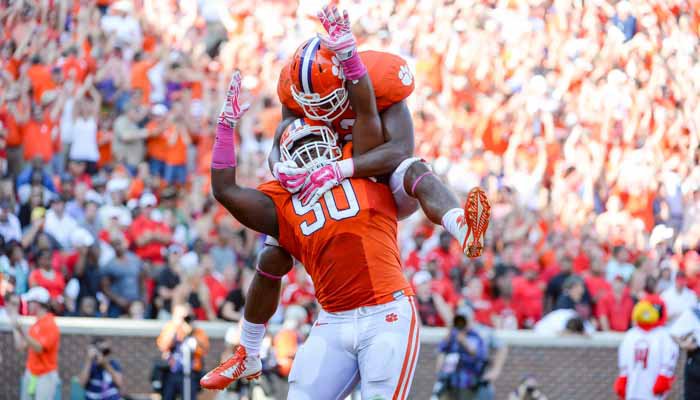 Grady Jarrett was a mainstay on Clemson's 2014 defense

The greatest defense of all time.

So why am I bringing this up now? Because someone emailed me late last week, and they wanted to know if I thought this year’s Clemson defense would be as good as the 2014 group that finished first nationally in total defense.

My response was typical for someone who doesn’t get caught up in hype, and who has done this kind of thing for a living for a long time. This year’s defense has potential. But there are question marks. There are holes at linebacker and safety and corner that need to be filled. We won’t know what this defense is, how good they can be, until the games start.

But that made me go and take a look back at the numbers from the 2014 season and a defense that included stalwarts like Grady Jarrett, Vic Beasley, and Stephone Anthony. How good were they?

So how does that compare to what Alabama did this past season?

Alabama gave up a total of 261.8 yards per game. That’s right. One more yard per game than that Clemson group in 2014. There are outliers, of course. This Alabama team played two more games (15 to 13), and had to play Clemson’s offense.

I even went back and looked at the offenses those teams played – Alabama didn’t face a true offensive juggernaut this past season (Western Kentucky ended up 5th nationally, but they play in a lesser conference) until they played Clemson. Clemson finished 12th nationally in total offense, and the next-highest is Southern Cal, which finished 20th. Of course, Southern Cal changed quarterbacks during the season and wasn’t the same team that faced Bama in the season opener.

Both defenses were really, really good. You can go deeper into the stat comparisons and find out some really interesting things. Best ever? Heck, if you just go by stats, that Alabama defense in 2011 set the bar, giving up just 183.6 yards per game. And if you go back through the years and decades, there are plenty of defenses that can stake their claim to dominance.

But Clemson can make the case that their 2014 season was almost as good – or better – than what Alabama produced this past season. As for next season……the Tigers are loaded on the defensive line with players like Christian Wilkins, Dexter Lawrence, Austin Bryant and breakout defensive end Clelin Ferrell. At linebacker, Kendall Joseph leads a talented group that includes Dorian O’Daniel, Tre Lamar, Shaq Smith, Jamie Skalski and others.

The secondary has veterans Van Smith and Ryan Carter leading the way for a bevy of talented youngsters like Trayvon Mullen and Tanner Muse. The potential is there for this group to be very good.

As good as 2014? Well, that group was legendary. The 2017 defense has to write its own story, and where it ends up is anyone’s guess.

Watching them write it will be fun.