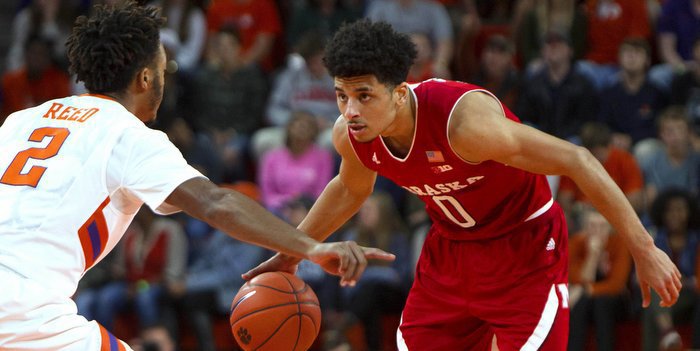 Nebraska missed a shot as time expired to give the Tigers the win (Photo by Josh Kelly, USAT)

Holmes calmly drained the second of two free throws to put the Tigers ahead 60-58, and Nebraska’s Tai Webster missed a runner in the lane as time expired to give Clemson the win. The Tigers improve to 4-2 with the victory, while Nebraska falls to 4-3.

It was the first matchup between the two schools.

Jaron Blossomgame was the only Tiger in double figures, scoring 15 points. Gabe DeVoe and Donte Grantham each added nine points, while Holmes, Shelton Mitchell and Marcquise Reed each scored seven. The Tigers and Huskers committed 17 turnovers apiece while Nebraska out-rebounded the Tigers 42-34.

The Tigers committed 12 turnovers in the first half, and those miscues led to an early deficit. The Huskers led 16-8 after a 3-pointer and layup by Tai Webster, and the lead swelled to nine at 29-20 after another layup by Michael Jacobson with just over three minutes remaining in the half. 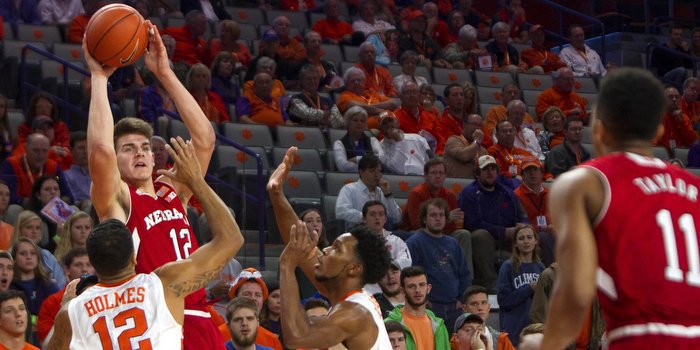 Nebraska missed a shot as time expired to give the Tigers the win (Photo by Josh Kelly, USAT)"

Avry Holmes hit a 3-pointer coming out of the break that made it 31-30, and the Huskers were tagged with a shot clock violation on their first possession. Blossomgame was fouled, and he hit one free throw to make it 31-31 barely a minute into the second half.

The teams traded baskets for much of the next five minutes, but Clemson made a move after Holmes hit another 3-pointer, Blossomgame hit a free throw and a basket and Reed hit two free throws at the 11:13 mark to give the Tigers a 47-44 lead.

Nebraska used a dunk by Ed Morrow to make it 47-46, but Donte Granthan had a follow-up dunk after a missed shot by Blossomgame to push the lead back to three. The Tigers drew a charging foul on the defensive end, and Djitte drove the lane at the other end, hitting a basket that made it 51-46 Clemson with just over eight minutes to play.

Clemson held anywhere from a three to a five-point advantage over the next four minutes, but after a Grantham turnover, Watson hit a fallaway shot that made it 55-54 with 3:34 to play, prompting a Brownell timeout.

Blossomgame missed a shot coming out of the timeout, but Djitte grabbed the rebound in a crowd of Cornhuskers, dribbled out of trouble and found a wide-open Grantham on the right side of the key. Grantham calmly drilled a 3-pointer, and the Tigers led 58-54 with 3:16 left on the game clock.

Just over a minute later, Djitte fouled out, and the Huskers followed that with a 3-pointer by Watson that tied the score at 58-58 with 1:30 to play. Djitte had six points and nine rebounds when he fouled out.

Grantham was fouled on the ensuing possession, and he hit the front end of two foul shots as Clemson led 59-58 with just over a minute to play. The Huskers ran thirty seconds off the clock, but Webster’s runner in the lane was corralled by the Tigers, who promptly missed a shot on the other end. The Huskers then took three shots at the basket, trying to reclaim the lead, but Anton Gill was called for a travel with 6.9 seconds left on the clock.

The Tigers inbounded the ball to Holmes, who was fouled by Webster in the frontcourt with 5.7 seconds on the clock. It was the tenth team foul on the Huskers, and Holmes missed the front end of the double bonus, leading to the final frenzy.

Clemson vs. Nebraska boxscore
Get the latest Clemson gear right here!
Comment on this story