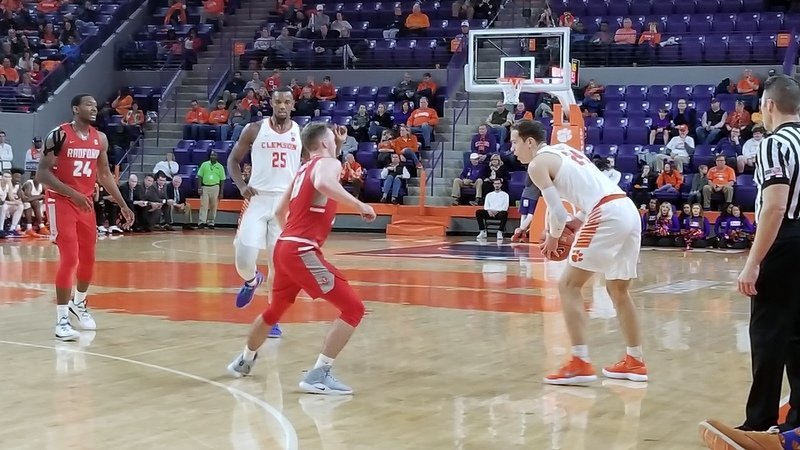 The Tigers improve to 7-3 with the win over Radford

CLEMSON – Elijah Thomas scored 11 second-half points on the way to a 15-point, nine-rebound effort, fueling Clemson to a 74-66 victory over Radford Saturday afternoon in Littlejohn Coliseum.

Thomas was 4-of-6 from the field and 7-of-8 from the free throw line and added nine rebounds. Shelton Mitchell scored a game-high 20 points for Tigers, while David Skara added 16 and Clyde Trapp 11.

Clemson improves to 7-3 while Radford falls to 6-4. The victory is the 156th for Brad Brownell in his Clemson career, tying Bill Foster for second-most victories all-time in Clemson history.

Mitchell scored 15 points to keep the Tigers on pace with Radford in the first half. The Tigers jumped out a quick 6-0 lead. The Highlanders came roaring back and the teams traded out the lead several times over the rest of the first half.

Trailing 24-22, Mitchell drained a jumper at the 3:30 mark of the half to tie the score, starting a stretch where he scored seven of Clemson’s last nine points in the half. Travis Fields hit a 3-pointer at the 1:30 mark to put Radford ahead 27-26, and Mitchell answered with a jumper of his own 23 seconds later to make it 28-27 Clemson.

Elijah Thomas used the left hand to bank a shot off the glass to start the second half for the Tigers, but Radford scored the next 10 points in a four-minute span to take a 40-33 lead. Skara ended the run with a runner of the glass at the 15:05 mark to make it 40-35.

The Tigers then got a little help from the Highlanders. Mitchell drove the lane and was fouled by Devonnte Holland. Holland was hit with a Flagrant-Two foul (for language) and was ejected from the game. Mitchell hit three free throws, and Aamir Simms drilled a 3-pointer from the right wing to complete a six-point possession and out Clemson ahead 41-40.

The Highlanders came right back, however, and scored five straight points to take a 45-41 lead, forcing Brad Brownell to take a timeout at the 12:23 mark.

The Highlanders held a 51-49 lead a few minutes later, but Skara hit a 3-pointer from the top of the key and Thomas again used the left hand off the glass and the Tigers were back in front at 54-51 with 7:42 to play in the game.

Clyde Trapp’s layup off the glass with just under three minutes remaining gave the Tigers a 62-58 lead, and 30 seconds later Thomas hit two free throws to give Clemson it’s largest lead since the beginning of the game at 64-58 with 2:17 left to play.

The Highlanders refused to go away, however, and another deep 3-pointer by Polite made it 64-61 at the 2:04, forcing a timeout. The Tigers answered right away as Thomas put back a Skara miss, and Clemson led 66-61, but the Highlanders hit another 3-pointer to make it 66-64 with 1:38 to play.

Thomas grabbed a Mitchell miss and attacked the basket, drawing a foul with 1:14 to play. He hit both free throws and the Tigers led 68-64. Radford hit a free throw at the 1:01 mark that made it 68-65, and following a timeout, Clyde Trapp hit a layup that gave the Tigers a 70-65 lead with just 46.4 left in the game. Trapp then made a play on the defensive end, forcing a turnover on the baseline with 36.5 seconds remaining to give the Tigers the ball with the five-point lead. Simms took the inbounds pass and went all the way to the hoop to give Clemson a 72-65 lead with 33 seconds left in the game.

The Tigers held off Radford the rest of the way. Clemson hosts Charleston Southern next Tuesday at 7 pm, then travels to South Carolina next Saturday for a 2 pm tipoff.

What a game from David Skara, who tied his season-high 16 points on 6-9 shooting from the floor! Skara also chipped in five boards in 36 minutes of action.#ClemsonGRITpic.twitter.com/G0bbQBASDD

Clemson vs. Radford boxscore
Get the latest Clemson gear right here!
Comment on this story