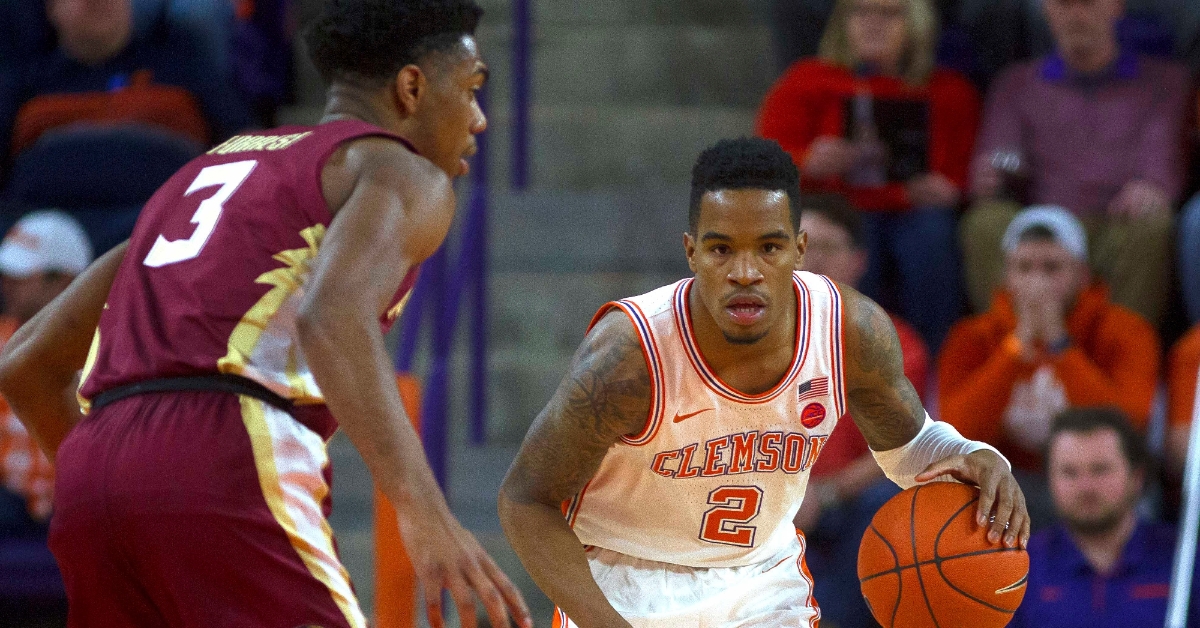 Al-Amir Dawes brings the ball up the court against the Seminoles (Photo: Josh Kelly / USATODAY)

When playing a team like FSU they will force you into uncomfortable positions and force mistakes. Even when Coach Brownell’s team turned the ball over they didn’t hang their head and continued to fight. The Seminoles had a significant size advantage going into the game and it hurt Clemson in stretches, but overall Clemson showed enough “grit” to compete for the entire 40 minutes. And they needed the entire 40 minutes. The Tiger family should be very proud. FSU is a deep run tourney team.

DAWES/NEWMAN’S ABILITY TO SCORE AT THE RIM

As I stated in the “Deep 3 Keys to the Game”, the Tigers were going to need to make individual plays around the rim and boy did they ever. John Newman was able to consistently get decent shots off the dribble and was aggressive all night getting the hole. He and Al-Amir Dawes led the team with 18 apiece and were the two players consistently able to make plays off the dribble to get into the lane. While Newman gets up there and has the ability to dunk on 2 people, Dawes was equally impressive with his series of creative finishes off the wrong foot and using either hand.

This seemed to kill every run that FSU started to make. The Noles really do a good job of getting downhill and as I stated earlier, were significantly bigger than Clemson at almost every position. The Tigers were able to combat their lack of size by establishing their position defensively and taking charges. Their rotations were pretty good all night and where they were able to create turnovers in a different way.

Brownell and his staff did some things at halftime to disguise their weaknesses. Dominick Olejniczak was dominant in the first half scoring in the paint with having about a five-inch height advantage over Aamir Simms. Brownell mixed the matchups and put Simms on Osborne to start the second and the moment that the ball went to the post, Simms went to trap and created a turnover. It’s little things like that which makes Brad Brownell elite in terms of X’s and O’s. Clemson also went back to their “slip” based motion offense after recognizing that FSU was switching at all positions on the floor. This created confusion and resulted in open shots for the Tigers.

Nothing else needs to be said. Littlejohn Legend in the making.

Clemson needed all 40 to win and as I said the Tiger family should be proud of their team. This was a masterful coaching job and the Clemson players did a really nice job at following their scouting reports. The Tigers move ahead to Virginia Tech on Wednesday, but not before enjoying this victory. The Tigers need to finish strong in hopes of having a postseason and Brownell and company have some unfinished business with a Hokie team that has been struggling of late. If Clemson is able to harness the same type of effort they should be able to handle business.

Overall, Great win in what has been a season full of them.