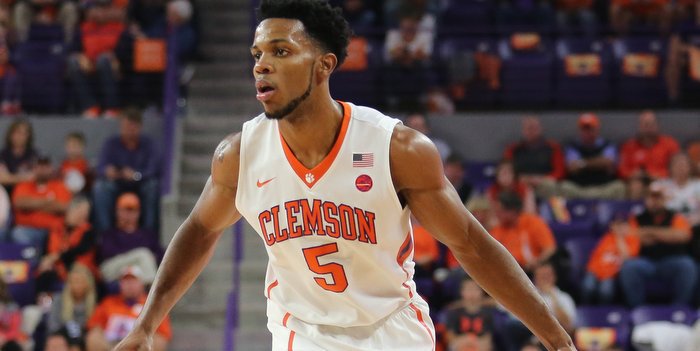 Blossomgame scored a game-high 27 points to lead the Tigers

A layup with just over six minutes remaining trimmed Clemson’s lead to just four, at 68-64, but the Tigers got a 12-footer from Marcquise Reed, a dunk by Blossomgame and a 3-pointer by Avry Holmes at the 4:17 mark to extend the lead to nine.

The Tigers were six-for-six from the line in the last minute of the game.

Clemson improves to 3-2 on the season with the win, while High Point falls to 3-3.

Blossomgame led five Clemson scorers in double figures, with Donte Grantham and Avry Holmes each chipping in 13 while Reed and DeVoe each added 11. Sidy Ditte had a game-high 15 rebounds.

“It was a little of a harder fought win than we would’ve liked down the stretch, but I thought our guys played with good offensive confidence," head coach Brad Brownell said. "It was really good to see Jaron (Blossomgame) play the way that he did in the second half. I thought he was outstanding offensively. Defensively, we played like a team with a 15-point lead and didn’t lock in defensively in the second half like we needed. College basketball is a different game now. There are just so many more players that can make threes on the floor, that at some point, someone is going to make a couple in a row, and the momentum of the game changes. Thankfully for us, we were able to get some stops late when we needed it, but I thought High Point showed some very good determination tonight. We knew we would face some zone, but I don’t think we thought we were going to play against 40 minutes of zone. So they had a good plan and gave us a good game - a little bit of a nailbiter there in the last few minutes.”

Transfer Shelton Mitchell made his first appearance of the season, adding a rebound and two assists in 11 minutes of work. Andre Fox led High Point with 22 points, while Anthony Lindauer added 16. The Panthers lost by three points - 62-59 - at Littlejohn Coliseum two years ago.

“It was good to have him back. He certainly isn’t where he was pre-injury, but he had two assists and no turnovers," Brownell said of Mitchell. "He’s a smart player, a heady guy who knows how to play. He plays with great confidence. We really need more of that - another experienced backcourt guy. He’ll keep working. There’s some things he has to do to get better, but it’s good to get a couple of things on tape for him to see, and also to play in a game. He hasn’t been in a game in a long time. You need some of that - there’s very few guys that just go into those situations and don’t think about things. Certainly, I think him getting a few minutes is good, but he’ll be a much better player in another month or two.”

DeVoe hit three early 3-pointers as the Tigers jumped out to an early 13-7 lead, but the Panthers battled back and a 3-pointer by Jamal Wright made it 15-13 Clemson. A layup by Siddy Djitte three minutes later pushed the Clemson lead to 10 at 26-16, and the Tigers led 44-31 at intermission.

The teams stayed within hailing distance of each through much of the early part of the second half, but a 3-pointer by Grantham from the top of the key at the 14:46 mark pushed the Clemson lead to 16 at 59-43 and it appeared the Tigers would blow the Panthers out of the building.

The Panthers would then go on a 21-9 run and closed to within 68-64 on a layup by Lindauer at the 6:17 mark that made the crowd restless.

The Tigers were able to hold off the Panthers the rest of the way for the win.

“One of the things I told our team when we were 2-2 was that we were 2-2 against some pretty good opponents. We have some pretty good wins, and we’ve lost some games against some teams full of good athletes and good coaches. We’ve really been able to find out a lot about ourselves after four games," Brownell said. "We have some warts that need attention. But we also have some things that we do well. There are some teams out there that are 5-0 or 5-1 that haven’t been exposed to some of the things that we’re going to be exposed to over the next month, so we have a chance to rectify some of those problems. Our job as coaches and players is to get on with that, and hopefully we’ve started it. We’ve had a very difficult last week, and the last couple of days, we’ve really practiced hard.”

Clemson returns to action next Wednesday night, hosting Nebraska as part of the ACC/Big Ten Challenge. The game will tip off at 9 p.m. and will be televised by ESPNU.

* Clemson moved to 4-0 in the series against High Point, and 2-0 under coach Brad Brownell.

* The Tigers shot 91.4 percent at the free throw line (22-24), the program’s third-best accuracy for a single game with a minimum of 20 attempts.

* Jaron Blossomgame and Sidy Djitte both made their 100th appearances in a Clemson uniform on Friday. It was Blossomgame’s 97th start.

* Blossomgame scored a season-high 27 points to lead all players. It was his second straight game with at least 20.

* Donte Grantham rebounded from a tough outing against Oklahoma with a 13-point performance Friday.

* Shelton Mitchell made his Clemson debut Friday. The Vanderbilt transfer previously sat out the 2015-16 season and first four games this year with a knee injury.

Clemson vs. High Point boxscore
Get the latest Clemson gear right here!
Comment on this story