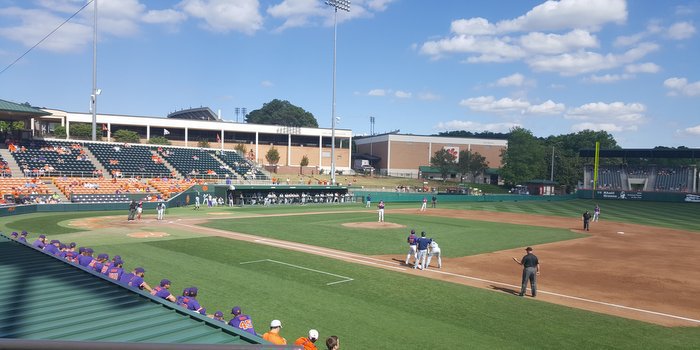 The Tigers defeated Georgia Tech 8-7 in game one

CLEMSON – It only took 22 hours, but Clemson finally got the win in game one against Georgia Tech.

Eli White’s one-out RBI single to left scored Reed Rohlman with the winning run in the bottom of the tenth, giving No. 23 Clemson an 8-7 victory over Georgia Tech Saturday afternoon.

Rohlman led off the tenth with a single up the middle and advanced to second on a ground out by Weston Wilson. White stepped up to the plate and laced a 1-0 single to left field and Matt Gonzalez bobble the ball, giving Rohlman just enough time to cross home plate.

Clemson jumped out to a 2-0 lead in the second, after Georgia Tech allowed a hit and had two errors in the second.

However, Georgia Tech scored a run in third on a long ball by Connor Justus, making it a 2-1 Clemson lead. The Jackets went on to score seven unanswered runs and eventually took a 7-2 lead into the seventh.

It was then that the Tigers roared back. Chris Williams singled with one out in the seventh, and Chase Pinder singled to short with two out. Maleek Gibson reached on an outfield error that scored Williams, and Seth Beer was hit by a pitch to load the bases. Chris Okey doubled to right field to clear the bases for a 7-6 lead, and the Tigers tied the game on a Rohlman single.

The Tigers defeated Georgia Tech 8-7 in game one "

In the bottom of the tenth, Rohlman singled and moved to second on a grounder by Weston Wilson, setting up White’s heroics.

Pat Krall came on in relief Friday and started Saturday to pick up the win, improving to 6-1 on the season. He pitched three innings, giving up just one hit and a walk.

Clemson vs Ga. Tech game one
Get the latest Clemson gear right here!
Comment on this story