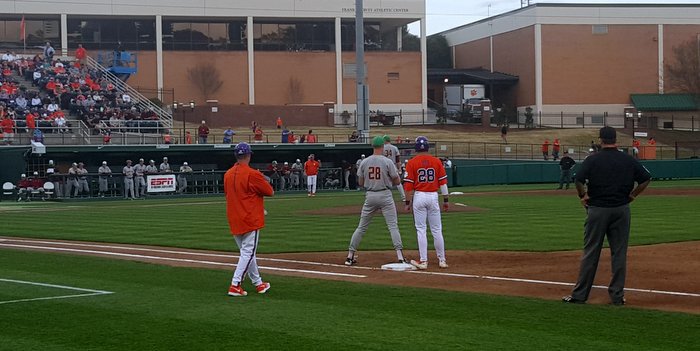 CLEMSON – Seth Beer and Weston Wilson hit two-run homers and Clate Schmidt pitched seven strong innings to improve to 4-0 as No. 19 Clemson defeated No. 22 Boston College 6-2 Friday evening at Doug Kingsmore Stadium in the first game of a three-game series.

Schmidt improved to 4-0 with the win, while Clemson improved to 14-3 overall and 3-1 in the ACC. Boston College fell to 12-4 and 2-2. Adam Renwick and Andrew Cox each had an RBI for the Tigers.

"I thought we played very well. We had to earn our runs tonight," head coach Monte Lee said. "Their starting pitcher is very good and he forced us to swing the bats and hit our way on and we did that. Rudy Cox and Adam Renwick had big hits. Seth Beer runs into one again with two strikes. The guy is superhuman. And then Weston Wilson hit another two-run homer for us. Just overall, I thought we played really well."

Beer took a ball between the shoulder blades on the second pitch of the second inning and advanced to second on a single by Robert Jolly. Andrew Cox – who was named the starter at first base – hit a two-out bloop single to centerfield to score Beer and give Clemson a 1-0 lead. Adam Renwick followed that up with a single to right field, scoring Jolly and breaking an 0-for-22 streak in extending the Tigers’ lead to 2-0 in the second inning.

The Eagles came roaring back at the expense of Schmidt. Stephen Sauter cut into Clemson’s lead on the first pitch of the third inning blasting a solo home run into the Cajun Café. Gabriel Hernandez followed with a blast of his own to right center to tie the game at 2-2. Jake Palomaki doubled to right, but Schmidt struck out Joe Cronin and Michael Strem to end the threat.

The Tigers answered with Beer in the bottom of the third. Chris Okey laced a one-out single to center to bring up Beer. Beer line what appeared to be a base hit down the right field line, but the ball was ruled foul to the ire of the fans and Lee. Two pitches later Beer made everyone forget about the foul, launching a two-run bomb over the Cajun Café for his eighth homer of the season and a 4-2 lead.

Schmidt ran into more trouble in the third. A walk, a single and failed pickoff attempt put runners at second and third with one out. Schmidt worked Sauter carefully, finally walking him on a 3-2 count to load the bases. However, Schmidt got Johnny Adams and Hernandez to strike out to end the threat.

Beer and Wilson added to the lead in the fifth. Beer bounced a double off the left-center field wall with one out, and Wilson launched a two-run shot into the Chapman Grandstands in left for a 6-2 lead. It was the second home run of the season for Wilson.

Meanwhile, Schmidt settled in and limited the Eagles’ chances, and he wound up pitching seven innings in his first Friday start of the season. He gave up just the two earned runs, walked two and struck out a career-high 11 in 114 pitches.

"Clate Schmidt showed a lot of guts. If you look at the one inning, he have up two homers and then a double," Lee said. "After that he got better and that shows you the type of makeup and toughness he has. We needed a guy to go out there and make a quality start and he did that and then some. He threw the ball exceptionally well and punched out 11. He wanted the baseball and kept competing and kept making pitches."

Game two of the series is set for 4 p.m. Saturday at Doug Kingsmore.

Clemson vs. BC game one box
Get the latest Clemson gear right here!
Comment on this story