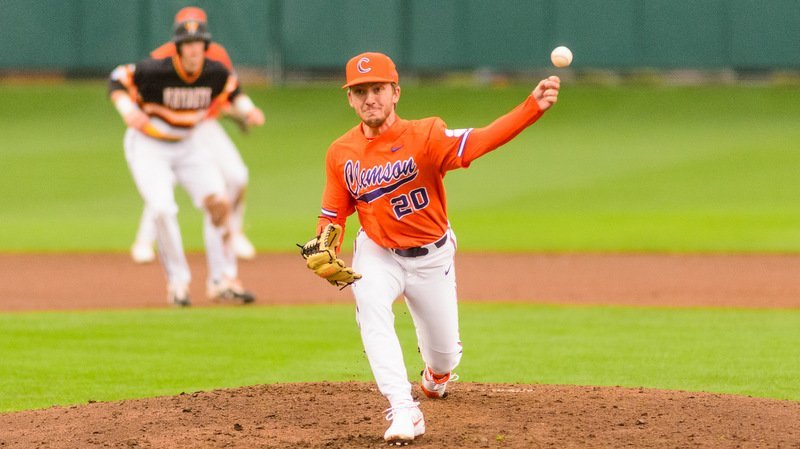 CLEMSON – Jordan Greene homered and drove in two as No. 14 Clemson defeated VMI 8-6 in the first game of a doubleheader Saturday afternoon at Doug Kingsmore Stadium.

Clemson improves to 4-1 with the win while VMI falls to 2-4.

The only previous meeting between Virginia Military and Clemson took place on April 29, 1916, in a game Clemson won 2-0 at Lexington, Va.

The Keydets took the early lead on Clemson starter Brooks Crawford. Jake Huggins singled up the middle with two out, and Nathan Lloyd cranked a 3-2 pitch over the wall in right-center for a 2-0 lead.

The Tigers eventually answered in the bottom of the third. Bryce Teodosio reached on a bunt single to start the frame and Sam Hall smoked a run-scoring double down the left field line to score Teodosio. Hall advanced to third on a groundout by Michael Green and scored on Logan Davidson’s grounder to short, tying the score at 2-2. The Tigers weren’t done, however. Davis Sharpe doubled to left-center and came around to score on Grayson Byrd’s single to right and the Tigers held a 3-2 lead after three.

The Keydets added an unearned run in the sixth after a hit batter, a passed ball and a double scored the tying run. 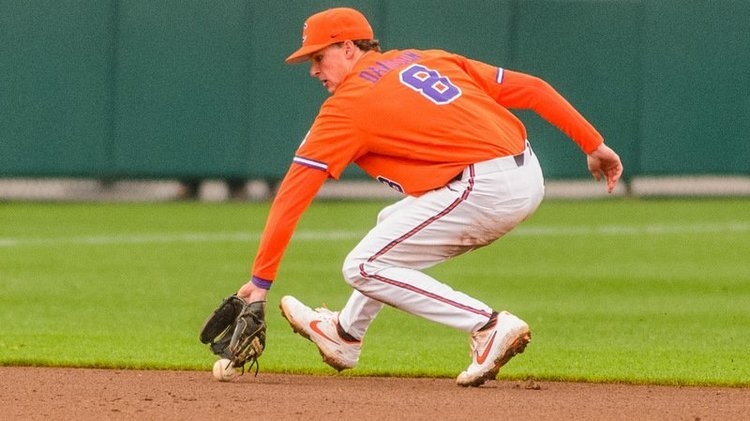 The Tigers went back in front of the bottom of the frame. Wilkie singled on a slow roller to third to start the inning, and Greene and Fairey walked to load the bases with no out. Teodosio hit a sacrifice fly to center to score the fourth run, with Greene moving over to third. Greene promptly scored on a passed ball, with Fairey moving down to second. Hall and then Green both walked to load the bases.

Davidson struck out for the second out, but Sharpe walked to force in the run for a 6-3 lead.

The lead didn’t last long. An error and a hit batter put runners on first and second against reliever Mat Clark, and Jake Huggins launched a three-run homer deep in the seats in left-center to tie the game at 6-6.

Clark earned the win, pitching 1 2/3 innings, giving up three runs (two earned) while walking one and striking out three.

Greene gave the Tigers the lead back in the seventh. Wilkie walked to lead off the inning and Greene quickly worked the count to 3-0. He thought he walked on the fourth pitch, but it was called a strike and he came back to the plate. Two pitches later, with a full count, Greene hit a homer into the seats in left for an 8-6 lead.

Closer Carson Spiers pitched the ninth and picked up the save, his third of the season.

The second game of the doubleheader will start a little after 5 pm. The finale of the three-game series is scheduled for Sunday afternoon at 1 pm.

Clemson vs VMI Boxscore
Get the latest Clemson gear right here!
Comment on this story