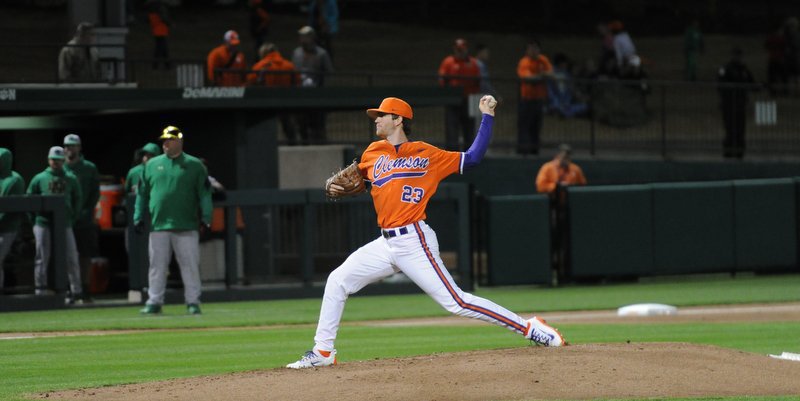 Barnes delivers a pitch in the third inning

CLEMSON – Monte Lee talks about wanting to win the free pass game, and his Tigers excelled at that Friday night.

No. 9 Clemson drew nine walks and Charlie Barnes had another outstanding outing as the Tigers defeated Notre Dame 4-1 in the opener of a three-game series at a windy and chilly Doug Kingsmore Stadium.

Clemson improved to 10-3 overall and 1-0 in the first game in ACC play. Notre Dame dropped to 3-9 overall and 0-1 in the ACC. The teams combined for just eight hits.

Barnes improved to 1-1, pitching 6 1/3 innings, giving up four hits, an unearned run, walking two and striking out seven in lowering his ERA to 0.69. Jacob Hennessy pitched the final 2 2/3 innings in picking up his second save.

"Great pitching tonight. Charlie Barnes was really, really good again for us," head coach Monte Lee said. "Jacob Hennessy came in and did an outstanding job behind him. We made one error and it was a tough ball and it was hit pretty good. We only walked two batters and hit one, so our free passes were under five, which is our goal every game. We struck out 10, so pitching wise we were really, really good and we only used two guys."

The teams were scoreless through the first 3 ½ innings, but the Tigers finally broke through in the fourth. Chase Pinder was hit in the left shoulder by a pitch to begin the inning, and he scored when Chris Williams laced a double down the left field line. Andrew Cox followed that with a single to left, scoring Williams, and Clemson led 2-0 at the end of the fourth.

The Irish didn’t push a run across against Barnes until the sixth. Jake Johnson singled to left to start the inning, and he moved to second on an infield single by Kyle Fiala. Johnson was caught stealing at third on a double steal, and Fiala soon moved to third on passed ball. He later scored on a wild pitch, cutting Clemson’s lead in half at 2-1.

The Tigers got the run back in the bottom of the inning. Andrew Cox and Weston Jackson walked to start the inning, and both runners moved up a base on Grayson Byrd’s sacrifice bunt. Patrick Cromwell bounced to first, and Cox was easily thrown out at the plate. That moved Jackson to third, and when Cromwell broke for second on a steal, Jackson broke for the plate. The second baseman’s throw to home was wide of the plate, and Clemson led 3-1.

Barnes hit a batter to begin the seventh, but the first out of inning came on a liner to left that was also Barnes’ 100th pitch. He was relieved by Jacob Hennessy, who induced a double play to end the threat.

The Tigers added another run in the seventh, and again it started with walks. Reed Rohlman and Seth Beer walked to begin the inning, and the runners moved up a base on Pinder’s sacrifice. Williams hit a smash to third and Rohlman was thrown out easily at the plate, with Beer holding at second.

Cox singled up the middle, and Beer scored ahead of the throw and Clemson led 4-1 at the end of the seventh.

"Offensively, we had a lot of really, really good at-bats. We drew nine walks, had two hit by pitches," Lee said. "We only scored in three innings - Chris Williams with a big double RBI, Andrew Cox a single RBI, scored a run on a double steal in the sixth and then Andrew Cox again with a two-out single RBI in the seventh, which was huge for us to take a three-run lead. We've got to do a better job with runners in scoring position, runner at third and less than two outs need to be a little bit better. They had the infield in a couple of times and we didn't get the job done in those situations. We need to be a little bit better there but overall, I thought our approaches were really good and I thought we threw the ball very, very well. It's good to get win number one in ACC play and we need to be ready to go tomorrow."

The second game of the series is set for Saturday at 4 p.m.

Clemson vs. Notre Dame game one box
Comment on this story