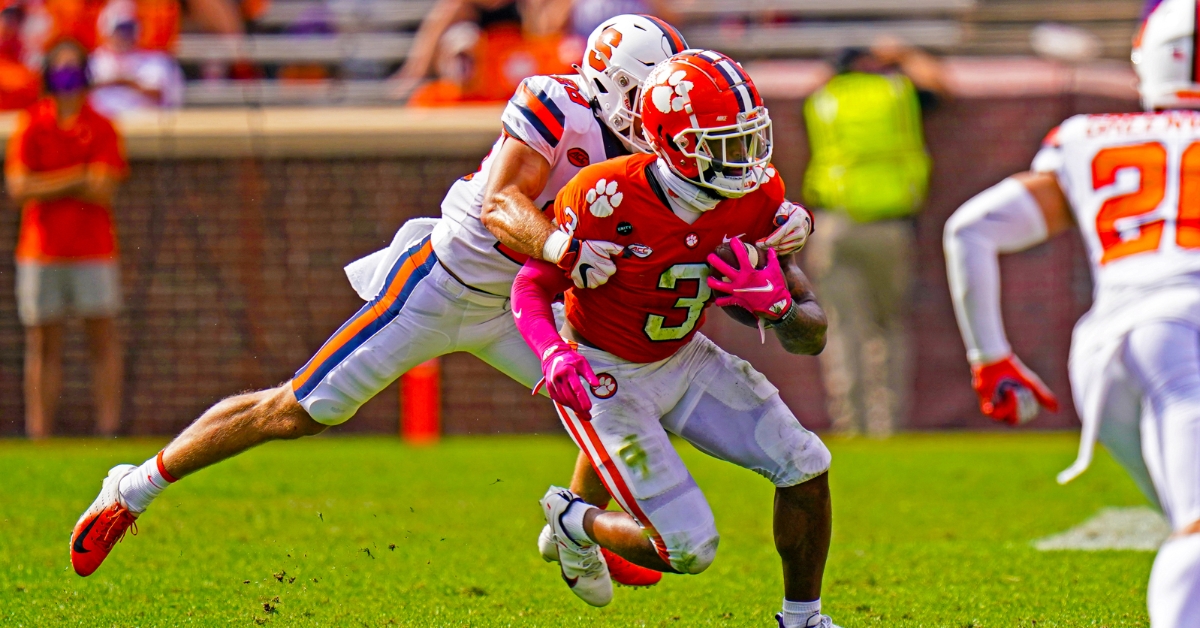 Amari Rodgers put together another stellar effort in the win over Syracuse. (Photo courtesy ACC)

Clemson’s offense hit a few bumps in the road that allowed the Syracuse Orange to be competitive with the top-ranked Tigers. Trevor Lawrence was quick to own his share of the responsibility saying, “I think it is obvious we didn’t play our best game. Probably played our worst game to this point and it starts with me.”

Fortunately for the Tigers, their defense forced four turnovers and scored a touchdown, keeping the surprisingly feisty Orange at bay. Syracuse scored 21 points, but one touchdown came after a blocked punt gave them a short field and another came on an interception return. After Syracuse pulled within 6 points in the third quarter, the Tigers scored 20 consecutive points to close out the game.

In the end, the Tigers earned a 26 point win and the AP voters kept them No. 1 in the latest poll. Earning the No. 1 ranking in the College Football Playoff rankings may be more important this season than ever before, as it could be the difference between playing Oklahoma State, Cincinnati, or Texas A&M in the No. 1 vs. No. 4 semifinal rather than Alabama or Ohio State in the other.

With that being said, let’s jump into analyzing Clemson’s 47-21 win.

Clemson’s defensive line missed defensive tackle Tyler Davis. Without him, Syracuse was able to muster enough of a rushing attack to keep themselves in the game. Freshman running back Sean Tucker was especially impressive, averaging 6.3 yards per carry (10 carries) and scoring a TD before leaving the game with an injury. His performance prompted the TV commentator to remark “I think Sean Tucker is going to be a star in this football league.” He is certainly a bright spot for a struggling Syracuse program.

Safety Nolan Turner put himself in the right place at the right time once again. The 2019 Fiesta Bowl hero snagged his third interception of the season and returned it 21 yards. SAM linebacker Mike Jones had the first interception of his career and returned it 40 yards, nearly taking it into the end zone. Jalyn Phillips, the sophomore safety who is earning more and more snaps, made a great effort-play to stop a 61-yard double-reverse to WR Nykeim Johnson from becoming a 70-yard TD. On the very next play, he intercepted a pass in the end zone.

On top of those great plays, Mike Jones and Bryan Bresee teamed up to force a fumble that Andrew Booth scooped up and brought to the end zone. That play put the Tigers up 34-21, ending any serious threat of an upset. The defense deserves superlatives for ensuring this game ended as a comfortable win despite the offensive and special team glitches.

Syracuse entered with a struggling rushing defense, but was able to slow Clemson’s running game. Tiger running backs averaged just 4.4 yards per carry. That number isn’t poor, but it is far less than you’d expect from the No. 1 team in the country with the best running back in the land. Some of this is due to Etienne missing a chunk of the game with dehydration, but he still received 16 carries. Clemson’s offensive line has generally been more highly rated in pass protection than run blocking, and this year’s unit seems to follow that trend. They allowed only 1 sack on the day.

With the running game slowed, the Tiger offense leaned heavily on Trevor Lawrence and the passing game. Lawrence wasn’t quite his usual self though. An early throw went right into the defender’s arms but, after several bobbles, was dropped. Later, he wasn’t so lucky when a pass thrown behind Amari Rodgers was intercepted and returned for the first pick-six of his career. Fortunately, one average performance won’t derail a Heisman campaign.

In fairness to Lawrence, Rodgers sometimes seems to be the only Clemson wide receiver open downfield. I’ve written a lot about how Rodgers has taken his game to another level and how the tight ends have been excellent this season. That was again the case on Saturday (TEs added 61 yards and another TD), but a lot of the windows to other receivers seemed awfully tight. Syracuse defensive backs were impressive knocking the ball away from Clemson receivers several times (8 passes defended) including ripping the ball out of Amari’s grasp after an amazing diving catch.

BT Potter missed his first field goal this season that wasn’t blocked. He knocked in two though and continues to be a weapon for Clemson. After all the issues in the Miami game with field goal protection, that hasn’t been a problem since. For the first time this season we saw punt protection become a problem when Davis Allen and Nyles Pinckney couldn’t prevent a Syracuse defender from swatting a punted ball. The punt block gave the Orange the ball on Clemson’s 20-yard line and led to a touchdown.

Allen and Pinckney got redemption on the very next drive when Clemson called a fake punt and they picked up the crucial block to spring punter Will Spiers to a first down run. Clemson special teams have had some great moments and some bad ones this season. It’s been exciting at the very least.

Alabama looked as dominant as ever in a 48-17 win over Tennessee. Mac Jones was a cool 25/31 for 387 yards, as he continues to surpass expectations. The ground game did the work in the red zone, scoring all five of the Crimson Tide’s offensive TDs. The story from the game though was the injury to speedster Jaylen Waddle. He suffered a high-ankle sprain and fracture and will miss the rest of the season. He is arguably the best wide receiver in the country. Hopefully, he fully recovers in time for the NFL draft and his draft stock isn’t hurt much.

It’s interesting to note that each year Clemson and Alabama have played in the postseason, a major injury has been a factor. In 2015, Clemson was without WR Mike Williams and lost CB Mackensie Alexander early in what eventually became a close loss to Alabama. When the Tigers avenged the loss in 2016, Eddie Jackson, who is now the highest-paid safety in the NFL, was out with a fractured leg. In the 2017 Sugar Bowl, the Tigers’ game plan was disrupted when WR Tee Higgins left the game with an injury. In the 2018 National Championship thumping, Alabama was without star LB Dylan Moses. If the teams face off this season, the Crimson Tide will be without their best wide receiver. Of course, they still have Devonta Smith and loads of other talented players.

Ohio State also returned to play and looked excellent as they pummeled Nebraska, 52-17. With a win finally under their belt, the AP voters rocketed them up to No. 3 in the polls. It appears the National Championship race may be a three-team affair, with the Buckeyes joining Clemson and Alabama.