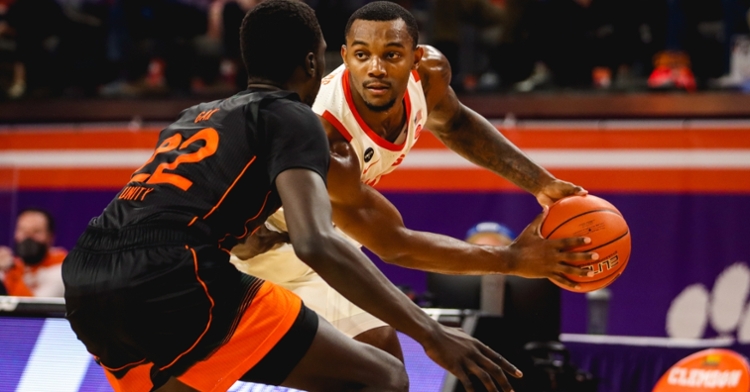 Simms scored 19 points in the win over the Hurricanes. (Photo courtesy ACC)

CLEMSON – Miami head coach Jim Larranaga will be happy to see Aamir Simms move on to the NBA.

Simms scored 19 points and played every minute of the game against Miami as Clemson pulled away late in the second half and defeated Miami 66-58 in Littlejohn Coliseum. In two games this season against Miami, Simms is 18-of-26 from the field and has scored 44 points. Al-Amir Dawes scored a season-high 19 points Saturday.

Clemson improves to 15-5 overall and 9-5 in the ACC and remains in the running for a top-four spot that would guarantee the Tigers a double-bye in the ACC Tournament. Miami falls to 7-15 overall and just 3-14 in league play. Clemson has now won five in a row, and has won five ACC games in a row for the first time in 31 years. Clemson ended February with a perfect 5-0 record. Miami has now lost five in a row overall and three in a row to Clemson. The Tigers are 10-1 at home this season.

The win was the 200th for head coach Brad Brownell at Clemson, the most in school history.

"This was a nice win today to finish up a great week for our team. Miami was tough to deal with," Brownell said. "Isaiah Wong's a terrific player. Miami made some shots and kept it close. We had to shoot the ball exceptionally well. I was really happy to see our players execute the way they did and make shots. We hit 11 threes. This was a challenging second half, but I thought our guys responded well. Guys made some big plays for us.

"Clyde [Trapp] was really good off the pass in the second half. He made some good assists. Al [-Amir Dawes] gave us a big jolt coming off the bench and hitting threes. His defense was good, also. Aamir [Simms] was terrific. His efficiency was incredible. That's why he's a really good player. He makes threes and can drive by you. He can score in the post, too. He was outstanding today."

Brownell was pleased with the performance of Dawes.

"He's really important. He brings a defensive presence to our team, and we really like his confidence and swagger," Brownell said. "He was terrific today. If he has a poor game, we don't win. He's been practicing better and his confidence has come back."

He then took the time to reflect on his 200th win with the program.

"I'm proud of it because of the longevity. I've had the privilege of coaching here for 11 years, and I feel very honored and blessed about it," he said. "My family and I have put our heart and soul into Clemson in terms of fundraising and a lot of things that involve more than just coaching the players. I've had the privilege of working with some really talented assistant coaches along the way, and the staff I'm working with now is terrific. I've had the pleasure of coaching a lot of great players here and still have close relationships with many of them, and that means a lot. I'm very thankful for having the opportunity to coach here for as long as I have, and I hope we can have some high-level success moving forward."

Clemson jumped out to a quick 6-0 lead behind 3-pointers from Alex Hemenway and Simms, but the Canes roared back and went on a 19-6 run to take a 19-12 lead at the 12:56 mark of the first half. At that point, Dawes got hot, scoring 10 points over a five-minute span that put Clemson back in the lead at 26-23.

The teams battled back-and-forth and the Tigers led 32-30 when Jonathan Baehre grabbed a Miami miss with 24 seconds remaining in the half. Clemson held for the last shot, and Nick Honor’s shot with one second left rattled home and the Tigers took a 34-30 lead into intermission. The Canes didn’t make a field goal in the last 5:11 of the half.

Clemson quickly extended the lead to seven at 39-32 after Hunter Tyson splashed a 3-pointer a few minutes into the half, but Wong kept the Hurricanes in the game after hitting a free throw that made it 45-42. Tyson and Dawes then hit back-to-back 3-pointers that made it 51-42, and the Tigers then threatened to run away with it when Dawes connected from long range and gave Clemson a 57-44 lead with just over nine minutes to play.

Wong continued to make plays and he fed Elijah Olaniyi underneath the basket for a score. Olaniyi was fouled on the play and hit the free throw and Clemson led just 57-54 with 5:16 remaining on the clock after the 10-0 Cane run.

Honor hit a layup that broke the streak and made it 59-54, and after the teams traded two empty possessions each, Simms nailed a 3-pointer from the wing that made it 62-54 with just 2:50 to play. Following a Clyde Trapp steal and a timeout, Tyson hit a 3-pointer from the left wing that gave the Tigers a 65-54 lead with just 1:59 to play. Clemson was able to maintain the lead the rest of the way.

Clemson won its first matchup of the season in Miami on Jan. 2 by a final score of 66-65.

Clemson returns to action next Wednesday, traveling to Syracuse to take on the Orange in a 5 p.m. tip in the Carrier Dome (ACC Network). The Tigers play at home next Saturday, hosting Pitt at Noon.

Our last four baskets come from No. ?? pic.twitter.com/SevVK50fjK