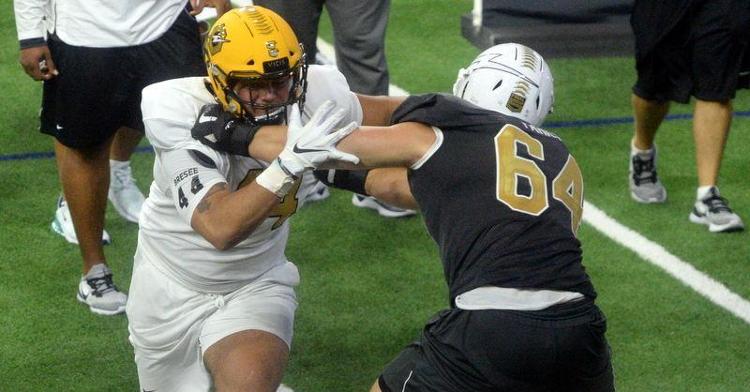 Bresee and Parks go head to to head Tuesday

FRISCO, TX – Myles Murphy had a front row seat for the Lineman Challenge at The Opening Finals Tuesday, and the only thing that would have made it better is if he could have played.

Murphy is the 5-star defensive end and Clemson commit out of Georgia who earned an invite to the finals, only to have a fractured toe curtail his participation. Murphy and his family still made the trip and Murphy sat on the second row behind the workout to get a glimpse of future teammates Bryan Bresee, Walker Parks, Mitchell Mayes, Demonte Capehart, and Tre Williams. Offensive lineman Paul Tchio sat out with an injury.

Williams and Capehart continue to impress, and Mayes held his own for most of the afternoon. Bresee and Parks went head-to-head at the end with both players able to claim a win.

Murphy loved every minute of the action and said he can’t wait to play with his future teammates.

“I feel really good about the future. I see Bresee and Tre and the offensive line guys and it’s crazy how good they are,” Murphy told TigerNet. “I can't imagine what it will be like when the entire defensive line is together. It's very scary for opposing offenses. You will have so much attention on the guys up front the linebackers will make plays. If you have coverage in the backfield there won't be much time for the quarterback.”

“He has a lot of power. I love his hands. He is very strong with the push-pull move. With him playing a 3-technique and then a 4-technique or moving outside, that is perfect for him. He is very aggressive when he does the bull rush, and he is very quick, too. He is quick on his feet.”

“He is a bull and uses leverage very well. Honestly, with that mix in the middle and me and Bryan coming off the edge, good luck with that.”

“He is very coachable. I saw him being coached by one of the former players and he did everything that the coach said. He adjusted his own stance and adjusted the way he was setting back. I am sure the offensive line coach at Clemson is going to love him. That is why he recruited him. During the 1-on-1's it maybe wasn't his best day but he did very well.”

The #Clemson DL commits putting on a show at The Opening Finals. Here is Demonte Capehart doing his thing: https://t.co/bJtQyZWMTh pic.twitter.com/bcHSw6ssJT