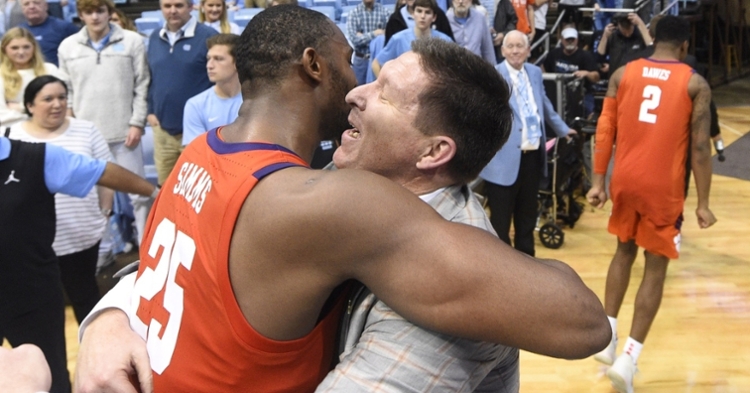 In a time of abnormal, Clemson’s basketball team gets a taste of normal when it takes on Mississippi State in the 2020-21 season opener tonight.

Clemson went just 9-11 in the league last year but had wins over No. 3 Duke, No. 5 Louisville and No. 6 Florida State. The Tigers also ended perhaps the most infamous streak in school history, breaking an 0-59 mark at North Carolina with a 79-76 OT victory last January.

“Our guys, we have had 30 something odd practices, which is a lot before you see somebody else,” Brownell told TigerNet. “It is going to be interesting to see how teams play early in the season. We have all had setbacks and we haven't had exhibitions and we haven't had scrimmages, so the best you've been able to do is play against yourselves. So that is good for a while, and then after a while it is a little bit more challenging to get your guys going. I know everybody is excited about playing Miss. St. We will get down there and be ready to go.”

Redshirt junior Abdul Ado leads a Bulldog squad that has plenty of size.

“Coach Howland does an unbelievable job over there and always has big, strong, talented teams,” Brownell said. “They defend the basket area really well and Ado inside is a really experienced and outstanding defensive player who I am sure will be asked to score a little bit more this year. They have some frontcourt transfers that are eligible that give them even more size. Those are big screening bodies that can free their scorers for shots."

Clemson has the familiar feel with All-ACC forward Aamir Simms and backcourt mainstay Clyde Trapp, but it also boasted a Top-20 recruiting class in the country for 2020 with the additions of PJ Hall, Olivier-Maxence Prosper and Lynn Kidd. It marked the program’s highest recruiting ranking since 2009, according to 247Sports.

Nick Honor is eligible for the Tigers’ in the backcourt after previously sitting out the 2019-20 season due to NCAA transfer rules. Honor has three seasons of eligibility left after playing his freshman year at Fordham. Honor spent last season on Clemson’s scout team.

Hall, out of nearby Dorman High School in Spartanburg, is one of the freshmen to keep an eye on. Hall is a 6-foot-10 post player who was rated as the No. 1 high school player in South Carolina and 10th-best nationally at his position.

“We’re trying to be as patient as we can be,” Brownell said of Hall. “But we also know that we need him to play this year and be ready and be good.”

Brownell then said that Hall is learning what it takes to play basketball on this level.

“He’s getting a lesson in the difference between high school basketball and high-level college basketball,” Brownell said. “The big challenge for high school kids is that you go from not being able to touch anybody under the basket because you’re always called for a foul to high-major basketball where there’s full-contact karate going on sometimes down there and no calls. So you have to get used to the physicality of the position. You’ve also got to get used to the speed of running up and down full court. Sometimes the center position is the position that is involved the most. The five man almost has to be in the best shape of anybody on your team. And so I think there has been a little bit of an awakening to that.”