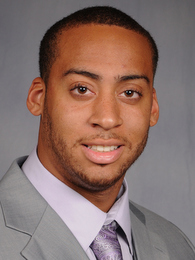 Defensive Tackle
B I O
Was one of the most productive defensive linemen on the team during his career ... had 148 tackles, nine tackles for loss, 5.5 sacks, 23 quarterback pressures, nine pass breakups, one caused fumble, one recovered fumble and one blocked kick in 1,215 snaps over 44 games (19 starts) in his career.

Before Clemson: Rated as the No. 1 defensive tackle in the nation in prep school by Rivals.com ... coached by Robert Prunty at Hargrave Military Academy; is now the associate head coach at Cincinnati ... comes from the same school that sent former Clemson All-American DeAndre McDaniel, former Clemson All-American Chris McDuffie and current Tiger defensive back Jonathan Meeks to Clemson ... played at John Dickinson High School in Wilmington, Del. ... burst on the scene when he was named MVP of a high school all-star game in Delaware at the end of his senior season ... coached by Craig Stephenson at John Dickinson High School ... recruited by Danny Pearman ... chose Clemson over Boston College, Duke, Florida State and North Carolina.