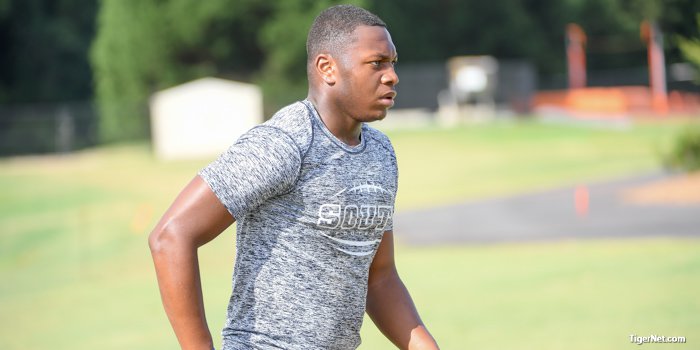 Mascoll moved into the top-250 prospects ranked by Rivals in their final 2018 rankings.

Rivals.com released its post-all-star game rankings, where receiver signee Derion Kendrick and defensive end signee Justin Mascoll were among a few Tigers to make some moves.

Four-star cornerback Kyler McMichael rounds out the current Clemson top-100 prospects at No. 53, moving up 32 spots.

“Mascoll had a good showing at Army Bowl week,” Rivals’ Chad Simmons wrote. “He has gotten stronger and he showed active hands in drills, he played tougher and he flashed his quickness off the edge. Clemson's defensive front has been strong in recent years and Mascoll could be next in line.”

Kendrick and McMichael also showcased their skills in front of scouts at the Army Bowl.

Kendrick, who played QB at South Pointe, was named the Gatorade Player of the Year in South Carolina and was a finalist for national player of the year after 50 total touchdowns and nearly 4,000 total yards (3,918) in South Pointe’s state championship run.

McMichael played running back and cornerback at Greater Atlanta Christian, totaling 1,483 rushing yards and 24 touchdowns with an 11.6 yards per carry average and adding 19 tackles.

A notable difference from 247Sports’ newly-released rankings is defensive tackle signee Josh Belk, who is rated as a five-star and the No. 25 overall prospect there, and not in Rivals’ top-250 prospects. Belk was given a four-star rating and bumped up to the No. 21 DT on Rivals. LB signee Mike Jones Jr. is also in 247’s top-200 prospects.