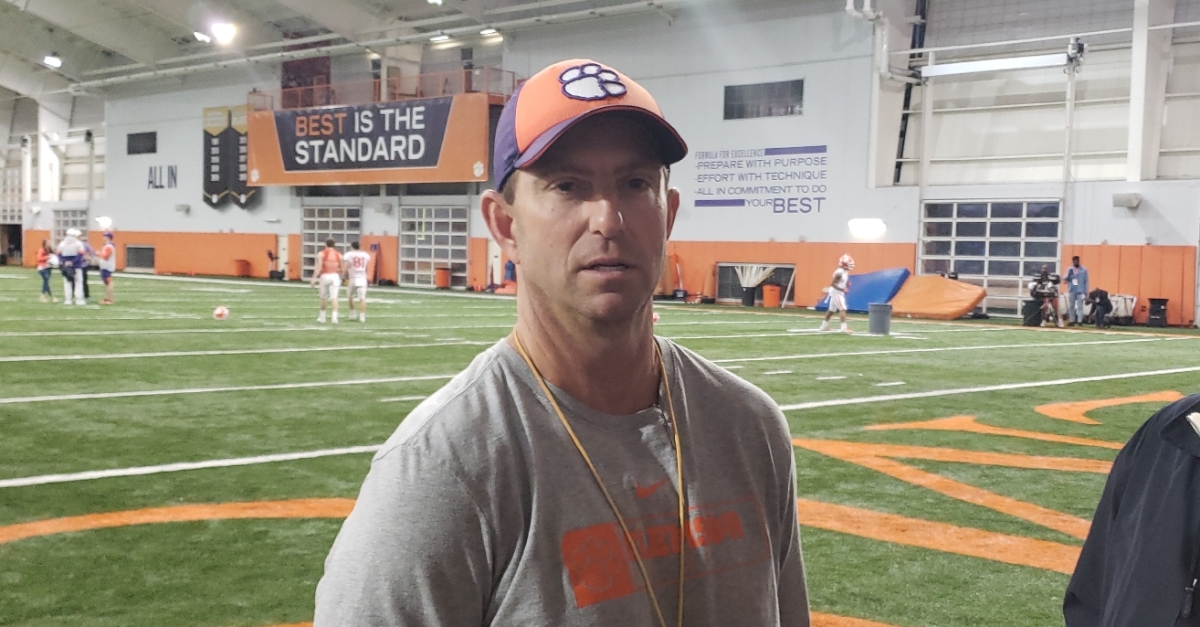 Swinney speaks to the media after Friday's practice

CLEMSON – Clemson has to replace four starters on the offensive line, but head coach Dabo Swinney gives that group a thumbs up after the first part of spring practice.

“Our first group offensive line gets a big-time thumbs up. I am super encouraged by those guys, and Blake (Vinson) isn't even out here right now,” Swinney said after Friday’s practice. “Those two tackles, Jordan McFadden and Jackson Carman have done a super job. And Bock (Matt Bockhorst) has been great. Will Putnam has really improved from where he was, and that's just experience and shows what it will do for you. Especially when you get a reset and can look back and realize how far you've come.

“I am really pleased with them. Our second group right now is all freshmen, and our defense doesn't really slow down. It's a challenge. We have got the right guys but they are getting a baptism right now. That comes with it. I love the guys we've got but we've got a lot of teaching to do. I am really encouraged. They are just not very good right now.”

He then complimented his defensive line.

“The defensive line is just night and day from where we were last year,” Swinney said. “It's not even close. In every area. Overall talent and functional depth, knowledge, experience, leadership - we are further along than we were.”

The Tigers are building toward next Wednesday’s stadium scrimmage.

“It's good. The other day was situational and controlled and tomorrow we will have half practice, half a normal scrimmage leading up to next Wednesday (full scrimmage),” Swinney said. “It's been good. I just challenged the team - we grade everything and spring ball is about getting better, it's about learning, correcting, applying, and being coachable. We are repping a lot of guys and everybody is getting a lot of work. It's fast. There are a lot of moving things going on out here at practice. We are correcting and teaching and looking for everybody to not make the same mistakes and showing that improvement.

“Some of them, it's just knowledge. There is a big gap knowledge-wise. It's being coachable and correcting. It's been good. This team, as I've said many times, is very talented. There are a lot of guys that can play their way into helping us. Monday and Wednesday will be big for us. Monday will be a normal practice day and clean up some things and put a few more things in and challenge them a little bit. We will meet Sunday and take some time to meet and go over our corrections and try to get everything ready for Wednesday and challenge them to get better.”

*Said EJ Williams will make a big jump after being in the weight room over the summer.

*Swinney said more than once that he feels like the Tigers hit on each of the mid-year enrollees. He says it’s a special group.

*The team is holding a reunion this weekend and Swinney has invited players going back to 2008. He said somewhere between 175-200 former players will be on hand, including Sammy Watkins, DeAndre Hopkins, and TJ Green. He said he can’t believe he’s been here that long, but some of the former players are now 33 and 34 years old.

*Cornell Powell leads the team in receptions so far.

*Cornerback Andrew Booth has progressed from a yellow jersey to a green jersey (limited).

*Derion Kendrick is back from his leg injury.

*Swinney said safety Ray Thornton has been impressive so far, while Lannden Zanders and Joseph Charleston will both be special. He then said that corner Fred Davis has taken every rep he can with the corners battling the injury bug.

*SAM linebacker Mike Jones, Jr., has been one of the bright spots in camp.

He then said he tries to use the three cuss words that are in the Bible.