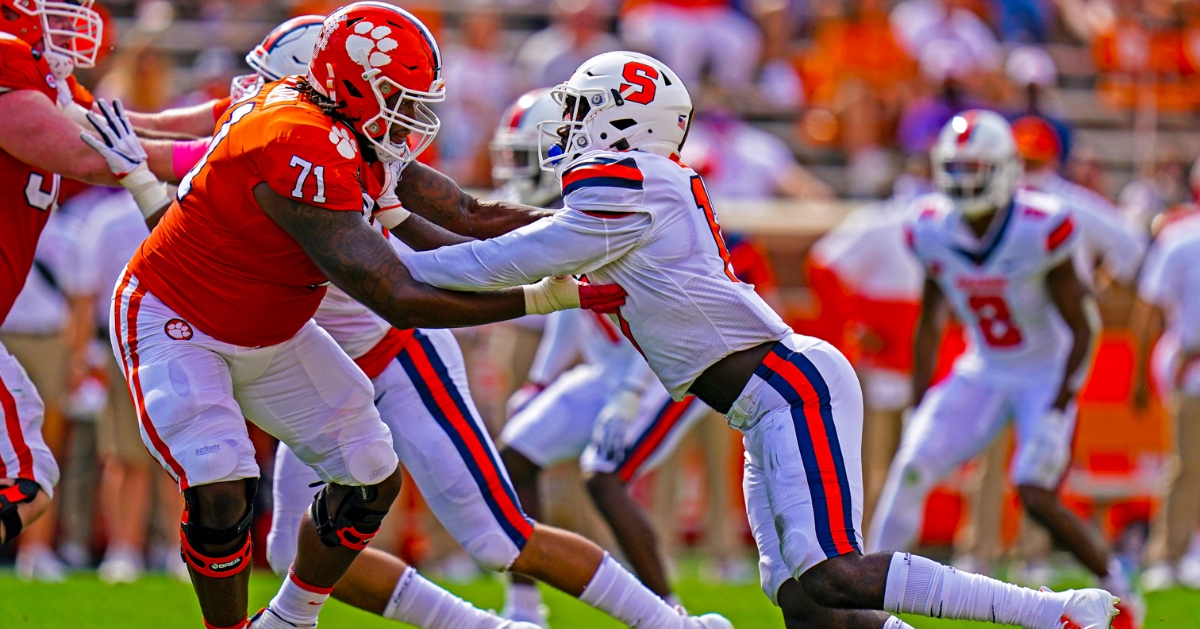 Marcus Tate played a big role as a freshman for the Tigers.

Clemson football put a wrap on another double-digit win campaign recently, and with the help of analytics, we take a deeper look into the 10-3 Tigers season by position, continuing with the Clemson offensive line.

Jordan McFadden had an outstanding season. He moved from right tackle to left tackle with Jackson Carman heading to the NFL and didn’t miss a beat. He was among the best tackles in the ACC and the nation. Clemson is fortunate he is returning for 2022. He is a star.

Walker Parks more than quadrupled his snap count from 2020 as he became the consistent starter at right tackle. He didn’t have a big step up in his performance, but he proved to be a quality starter, particularly in run blocking.

Putnam missed three games with injury but otherwise was a fixture at right guard while left guard and center seemed to change every week. He was a high four-star recruit and will look to take that next step in his development as a senior in 2022. 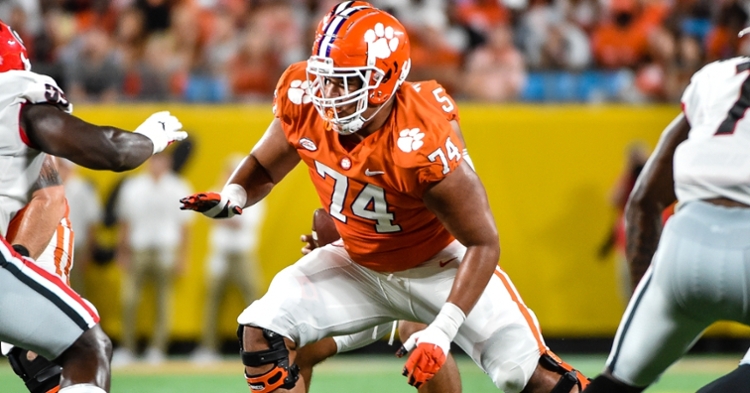 Marcus Tate played a big role as a freshman for the Tigers. "

Marcus Tate became only the third true freshman offensive linemen since 1973 to start a season opener for Clemson. Unfortunately, he looked somewhat in over his head early in the year, especially in the opener against Georgia. It was sub-optimal to have a freshman starting the first game, but a lack of depth coupled with an injury to Mason Trotter forced the issue. Later in the year his PFF grades improve, evidence of his progression. He will be in the mix to start next season, but Hunter Rayburn, Mason Trotter, or a potential incoming transfer could also end up starting at left guard.

Rayburn played some at left guard as well as center. He was a bit inconsistent and receives a low PFF grade in pass blocking, but he also helped Clemson get the run game going at times. With 505 snaps this year, he got valuable experience and will be in the mix to earn a starting spot at center or left guard next season.

Mason Trotter received the second-highest PFF grade among Clemson offensive linemen. He missed the first five games of the season with a broken hand, but returned after the open date and improved as the season went along. He wasn’t a highly-touted prospect and is smaller in size than some of the other players on the O-line, but you can’t argue with results. He’ll have a good shot to be the starting center next season as a redshirt junior.

Matt Bockhorst was a returning starter, but he shifted from left tackle to center this season. He struggled with the change and posted the lowest PFF grade of Clemson O-lineman with significant snaps. When Mason returned from his hand injury, it allowed Bockhorst to move back to left guard where he looked more comfortable. Unfortunately, just as he got settled back into his old position, he suffered a torn ACL that ended his Clemson playing days. He ended his career on a tough note, but he was a good leader and representative for the Tigers.

Entering the season, there was a lot of positive chatter coming out of fall camp about how the offensive line had made big strides. That made it tough to swallow when they couldn’t slow down Georgia’s pass rush and couldn’t create holes for the running game against NC State.

After the poor start, things got better as the year progressed, particularly when Trotter returned from injury. Aside from an ugly showing against UConn, when they couldn’t generate any sort of push for the running game, they played relatively well late in the season. They completely had their way with then-10th ranked Wake Forest. They bullied the Gamecocks and held their own against Iowa State in the bowl game.

The tackles were good all season, but figuring out the interior of the offensive line will be imperative for 2022. Everyone who started in the bowl game returns as well as Trotter (who missed the bowl game due to a violation of team rules). The Tigers also get Ryan Linthicum and Tristan Leigh off of their redshirt seasons and appear to be courting at least one potential interior offensive lineman as a transfer.

The offensive line play was inconsistent, making it very difficult to land on the proper grade. Fortunately, they were a young group that ended the year playing much better than they started, which gives us a lot of optimism for the future.