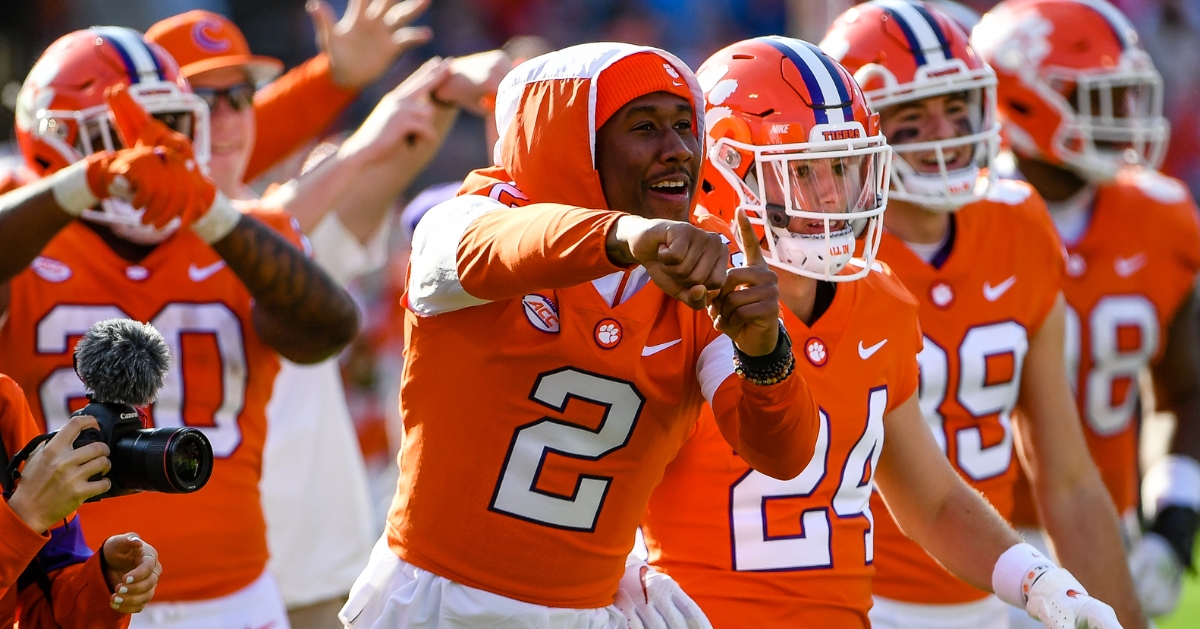 Frank Ladson's season never really got off the ground and now he's set to transfer out.

Clemson football put a wrap on another double-digit win campaign recently, and with the help of analytics, we take a deeper look into the 10-3 Tigers season by position, continuing with the Tiger wide receivers.

Ross returned from neck surgery after missing 2020 and was indisputably Clemson’s best wide receiver. He led the Tigers in receptions, receiving yards, and tied for the most receiving TDs. He was also the best perimeter blocker. Unfortunately, it was also his worst statistical year as a Tiger – excluding 2020. He was sure-handed with a miniscule 2.1% drop percentage, but he didn’t show the acrobatic ability to win jump balls like he did as a freshman. He missed the final three games of the season with a foot injury and will now head to the NFL draft.

Through the season’s first nine weeks, Beaux Collins had just 97 yards and played 168 snaps. He had a breakout game against Louisville going for 104 yards and his first career TD. Over the final five games (including at Louisville) he played 299 snaps and had 310 receiving yards. He still needs to cut down on the drops, but he heads into 2021 with positive momentum from a strong finish to his freshman campaign.

Ngata’s season was quite the opposite from Beaux Collins’s. He started off strong with 110 yards against Georgia and had 333 yards through the first five games. He was on pace for 868 yards (over 13 games) but slowed down after the Tigers’ open date. He had just one catch against Syracuse (Week 7) – albeit a beautiful TD grab – and then missed the Pittsburgh game due to COVID protocol. Limited by a foot injury, he had just five more catches the rest of the season. The former four-star recruit will need to stay healthy and cut down on the drops to put together a breakout senior campaign in 2022.

Dacari Collins only had 18 receiving yards prior to November, but he came on strong towards the end of the year to finish with 221 yards. Like many of the other Clemson receivers, he will need to be more sure-handed, but he was a good blocker on the perimeter and looks to be developing into a major contributor.

After collecting 306 yards as a freshman, EJ Williams only had 66 yards in 2021. Injuries limited him to eight games and he wasn’t 100% healthy when he was on the field. He should bounce back if fully healthy next year.

Ajou had a tough year. He often looked lost when figuring out who to block and had his own issues with dropped balls. The Canadian has elected to transfer to USF where he will play for former Clemson Co-OC Jeff Scott.

Will Swinney has been a superb holder for several years, but injuries pressed him into action at wide receiver in 2021. He was by no means a game-breaker, but he didn’t have any drops and was the WR corps’ third highest-rated run blocker.

Frank Ladson had just four receptions in an injury-riddled season. He was a high four-star recruit but only had 31 catches in three years at Clemson. He has entered the transfer portal, but his destination is still unknown. Some have predicted he will head back home and play for Miami, but that is yet to be determined.

2021 was certainly a down year for Clemson wide receivers. No player was able to match Amari Rodgers’ (79.1) or Cornell Powell’s (75.1) 2020 PFF grades. Justyn Ross’s 514 receiving yards was the lowest total for a Clemson leading-receiver since Kenya Crooks led the Tigers with 444 in 1996.

While QB DJ Uiagalelei had his share of accuracy issues, drops and struggles getting open made it a vicious cycle. Blocking in the screen game was a problem too.

Fortunately, improvement is on the horizon. While Ross, Ajou, and Ladson are departing, freshmen Beaux and Dacari Collins got valuable experience and are now prepared to contribute from game one in 2022. Adam Randall and Antonio Williams are blue chip recruits who will come in and add depth. Getting healthy seasons from Brannon Spector and Troy Stellato in the slot would go a long way as well. The biggest key may be the health of Ngata and Williams. If they can stay healthy, they have flashed their high upside and could lead this position group next year.