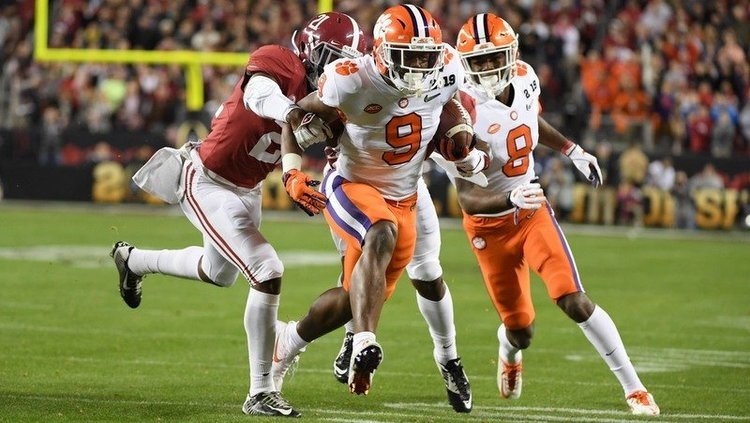 Etienne has a chance to set a few Clemson rushing records

CLEMSON – Travis Etienne is considered to be one of the best backs in the nation heading into 2019, he’s on several Heisman Trophy short lists, and he’s poised to break some of Clemson’s hallowed rushing records.

Despite the fanfare and the accolades, however, running backs coach Tony Elliott pushes Etienne every day. In the meeting rooms, on the practice field, and in his everyday life.

It’s the way Elliott was coached by someone named Dabo Swinney.

"Ultimately, when you're the best version of yourself, you're dying to share that with somebody. You don't want anything in return, you're just to pass that forward to someone,” Elliott said Monday. “With all my guys, that's the core value in our program. That's who Coach Swinney is. That's how he coached me. Even though I wasn't anywhere near the most talented guy in the receiver room, he challenged me to be the best version of myself, which resulted in me being able to earn the respect of my teammates and be a team captain, which doesn't likely happen from a kid that's maybe the fourth kid on the depth chart at receiver.

Etienne finished his sophomore season with 1,658 yards rushing on 204 attempts and 24 rushing touchdowns. He spent more than a few weeks on everybody’s Heisman list and should be in the conversation next season.

"Really, that's just with all my guys - challenging them to be the best version of themselves, because that's my ultimate responsibility as a coach,” Elliott said. “When it's all said and done, no one is going to care about the record that Jeff and I have as coordinators, nobody is going to care about the national championships. Really, what I am going to be judged by is how I impacted this young man's life for the 3-5 years that I have him. His family is counting on me. Back there in Jennings, Louisiana, he's the pride of that town, and they're counting on me to make sure that when he comes back there, he's not just Travis Etienne that can run the football, he's Travis Etienne that can really change the community because he's trying to be the best version of himself."