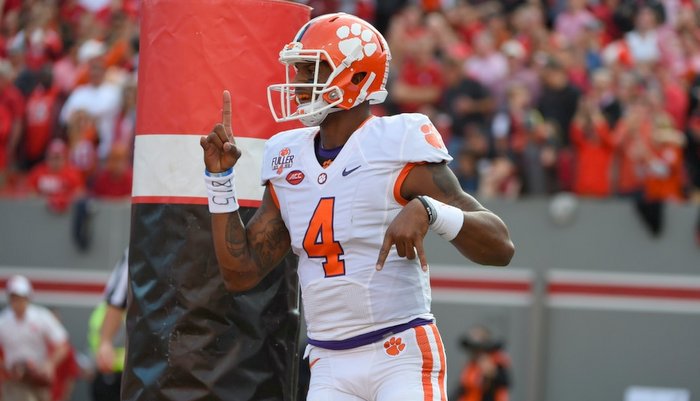 Hindsight is a powerful resource. I guess we could have seen this one coming. Back-to-back road games, a fairly tough environment, a fairly talented opponent that has a sense of urgency, an ambush laying in wait, a confident Clemson team coming off of a 58-0 win where everyone pats them on the back for a week.

The formula was in place, and the defense and special teams took the bait. Fortunately for Tigers, Deshaun Watson, and the offense came to the rescue.

The offense answered over and over again. Clemson outgained State 623-389. Watson was phenomenal. The sophomore went 23-of-30 for 383 yards with five touchdowns and no interceptions. He spread the wealth as seven Tigers scored touchdowns.

The offense was balanced once again with 383 yards through the air and 240 on the ground. Wayne Gallman 31 carries for 172 yards and a touchdown while Watson added 54 yards rushing and another touchdown.

Defensively, Jayron Kearse and Ben Boulware were not their normal selves. You have to give State credit for a good game plan where they broke the huddle late and didn't allow Clemson much time to adjust their calls.

Wolfpack quarterback Jacoby Brissett played well and proved to be a difficult player to sack due to his size and strength.

I also give State's players a lot of credit. The kickoff return for a touchdown was well blocked, and Nyheim Hines has a great burst. David Grinnage made an unbelievable tipped-ball catch to give State a critical first down. Jaylen Samuels is a great athlete who had a 66-yard run and a 40-yard touchdown reception.

This ended up a 15-point win in a road game where the Tigers were only a 10-point favorite. The Tigers moved up in the coaches poll and stayed number three in the AP poll. Most believe Clemson will be in the top four when the initial college football playoff poll is announced Tuesday. So Clemson escaped Raleigh with a win, but most importantly it emerged with a valuable lesson. The defense and special teams were humbled, and a few players might have come back down to earth. This might be the best thing to happen to this team at this time. FSU will have Clemson's full attention, but this game will help in the games with Syracuse, Wake Forest, and South Carolina.