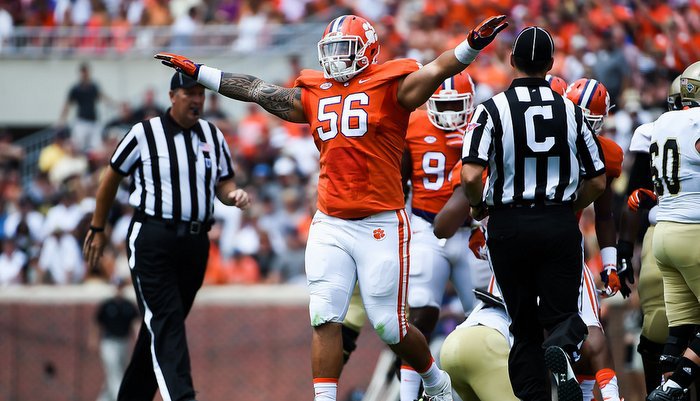 Saturday was not the indicator for how this defense will play all season. No one will mistake this Wofford team as an offensive powerhouse. However, we did get a chance to see this defense for the first time, and there were some encouraging signs.

Christian Wilkins
Fr. Defensive Tackle
#42 6-5, 299
Longmeadow, MA
View Full Profile made his debut with 24 plays and had six tackles including a tackle for a loss. Jabril Robinson

Albert Huggins
Fr. Defensive Line
#67 6-3, 286
Orangeburg, SC
View Full Profile saw his first action and had a tackle on one of his 12 plays.

The Tigers played a pretty clean game in terms of tackling and had few missed assignments. A couple of trick plays were the only real success the Terriers had all day.

Brent Venables
Def. Coordinator / Linebackers
View Full Profile attacking game plan Saturday. The Tigers got upfield, and the penetration caused Wofford trouble from the opening series. Clemson did allow a couple of longer passes as a result, but I liked the aggressiveness.

So hopefully Saturday was a preview of things to come. This was a complete defensive domination. The Tigers played a bunch of people including a ton of freshmen, and there was little drop off when the newcomers took the field. The tackling was solid as well.

I was very encouraged by the speed and athleticism we saw on defense Saturday. I was also impressed with the depth.

Wofford was not a test, and the offenses will get much better starting this week with Appalachian State. However, the drop off from the nation's number one defense might not be as big as some expected due to solid recruiting, evaluations and player development on that side of the football.