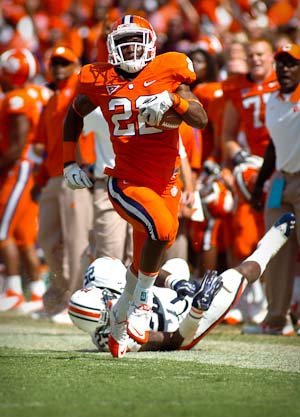 For the second straight season Clemson is faced with replacing a 1,000-yard rusher on its offense.

Roderick McDowell
Running Back (2009 - 2013)
#25 5-9, 195
Sumter, SC
View Full Profile stepped up into the role and played extremely well in his senior season.  McDowell actually had more yards per carry than Ellington in either of his 1000-yard seasons.

The plan last year was to be a running back by committee.  McDowell was splitting time with Zac Brooks

C.J. Davidson
RS Jr. Running Back
#32 5-11, 185
Clemson, SC
View Full Profile turned some heads in fall camp and played his way into some time on the field also.  There was some talk about Tyshon Dye

The plan for running back by committee fell through when Howard and Brooks battled injuries and inconsistencies, so McDowell stepped into the role as the main back.

Heading into fall camp this year the staff is faced with the same issue of having to replace a 1,000-yard rusher and they don't have a proven commodity on board. However this year there appear to be more candidates and more depth.  Therefore, I would expect to see a 1,000-yard rusher this season but I also wouldn’t be surprised to see the Tigers have an improved running game in 2014.

Brooks and Howard are the most experienced but to me they looked behind the younger backs in spring practice.  Brooks rushed for 119 yards as a freshman and 251 yards last season.  He has battled shoulder problems and ball security issues and will have to work hard in camp to regain the trust of the staff if he wants to be the featured back.

Howard has 599 yards rushing in his career with 231 of those coming last season.  He burst upon the scene with 86 yards on the ground against Auburn as a freshman but has not been healthy enough or consistent enough to build any momentum in his career.

Davidson is a former walk-on and track athlete from nearby Daniel High School.  He rushed for 156 yards on 34 carries last season with four touchdowns.   He was a bigger part of the game plan in the orange Bowl win over Ohio State where he touched the ball four times for 30 yards in key moments.  In my opinion, Davidson looked one of the top two backs in the spring.

The best back I saw in the spring was Gallman.  The staff decided to red-shirt him last season but loved his toughness and physical nature with the ball in his hands.  Gallman is described by Dabo Swinney

Dabo Swinney
Head Coach
View Full Profile as a violent runner and I think he has a great chance to be the top back in this offense for several reasons.  Perhaps the most important reason though is his toughness, plus the fact the Clemson will need to replace Tajh Boyd

Dye sat out last year with injuries and tore his Achilles in the spring.  I have doubts about when he will be physically 100 percent and worry about the rust and confidence heading into the fall.  When he was healthy last year Dye looked like the most talented back on campus, but he was not healthy very long.

Adam Choice
Fr. Running Back
# 5-10, 200
Thomasville, GA
View Full Profile is a true freshman that will have a big transition to make going from a high school quarterback to a college running back, but he has a lot of physical tools and could play his way into the rotation at some point as well.

In summary, Clemson may not feature a 1,000-yard running back in 2014 but the Tigers appear to be deeper at the position heading into fall camp.

Tavaris Barnes
RS Sr. Defensive End
#9 6-3, 270
Jacksonville, FL
View Full Profile and family, Dustin and Brittany Peurifoy, and our great country and the men and women in uniform that protect and serve it every day, plus their families