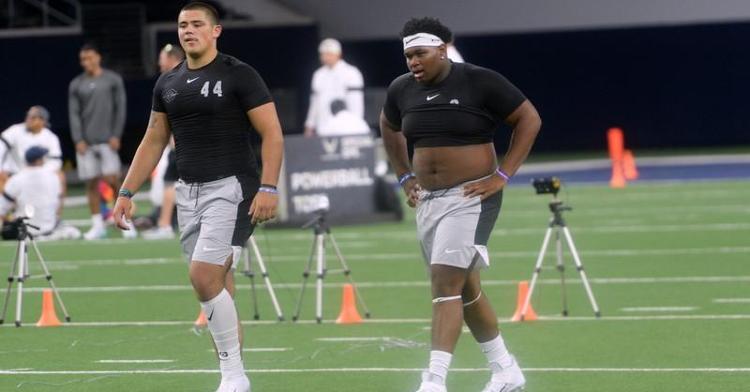 Bresee and Williams are no dream pairing for Clemson, with both already committed to the Tigers.

Four Clemson commits were among the standouts at their positions during the Opening Finals in Frisco, Texas this week, per 247Sports.

No. 2-rated 247sports Composite prospect Bryan Bresee was judged to be "pretty unblockable" when determined and "a future first-round talent" by 247Sports director Barton Simmons.

"He flashes quickly when the ball is snapped," Simmons said. "Lining up as a shade, he can generate power and win with a dominant bulrush or he has the quickness to cross the center’s face with really good lateral quickness. Heading to Clemson where he’s going to get opportunities to be disruptive in that scheme, Williams looks like he will be a problem in the ACC."

Staying in the trenches, Walker Parks made the list out of Clemson's O-line contingent on hand. He has been a fast-riser on the recruiting combine circuit and shot up the rankings, moving into the top-100 nationally for both Rivals and ESPN.

Parks, Bresee and Williams all made the final five competitors group on the offensive line and defensive line respectively at the Opening Finals.

Joining Bresee and Williams on the defensive standouts was cornerback commit Fred Davis, who shined in 7-on-7 competition this week.

"If you’re looking for a cornerback that never gets beat, never is overmatched and will capitalize when given the opportunity, Davis is your guy," Simmons said. "He’s got the length to match up with big receivers, he doesn’t get fooled on underneath stuff and goal-line route combinations and he had one of the most consequential interceptions of the week when he snatched up a tipped ball and returned it for a touchdown to force overtime in knock-out play."

Another Clemson target in tight end Arik Gilbert also made the list.