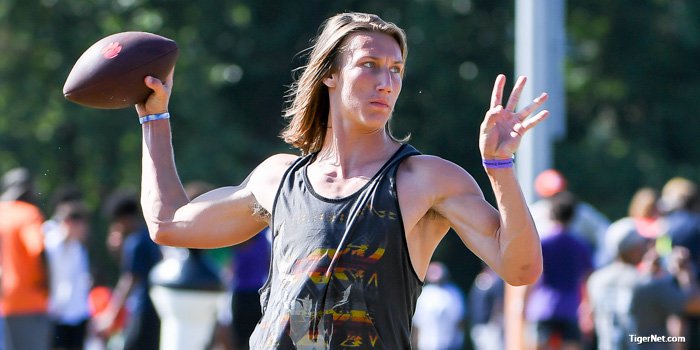 5-star 2018 quarterback Trevor Lawrence from Cartersville, Georgia (Cartersville HS) has Clemson and Georgia in his final two schools according to his Twitter account.

TigerNet.com spoke with the highly recruited signal-caller back in March, and he had the following positive things to say about TigerTown.

"Good visit," Lawrence said. "A lot of stuff academic wise, saw all the facilities again and had some good talks with the coaches."

He was very impressed with Clemson's coaching staff. "Coach Streeter and really just the whole staff, they are awesome."

TigerNet was on hand for the 2016 Dabo Swinney camp and was impressed by his passing accuracy and overall athleticism.

Lawrence is rated the #1 2018 player overall by 247Sports.com and Scout.com. As a sophomore, he completed 233 out of 364 passes for 3655 yards with 43 touchdowns and only four interceptions.

In the 8th grade, he passed for 1173 yards with 18 passing touchdowns and had 333 rushing and nine rushing touchdowns.