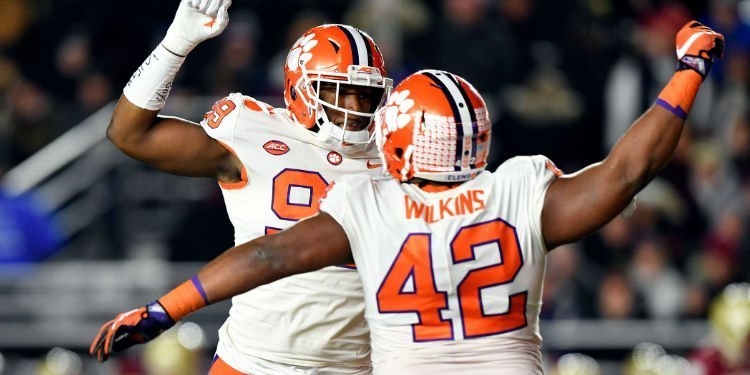 The 2019 NFL Draft will be here before you know it.

Sports Illustrated released its latest Mock Draft recently and had four Clemson defenders were projected in the first round.

Defensive end Clelin Ferrell was chosen No. 4 overall to the New York Jets and the No. 2 DE behind Ohio State's Nick Bosa (1).

"The Jets could use any premiere player to pair with Leonard Williams up front," SI.com said. "But it’s been years since they had a true pass-rush threat coming off the edge, and Ferrell would provide just that."

Defensive tackle Christian Wilkins was rated No. 7 overall and projected to team up with former Clemson standouts Vic Beasley and Grady Jarrett.

"Despite their investments in the defensive line, the Falcons’s front four hasn’t been nearly disruptive enough in 2018," SI.com said. "Wilkins would be a little redundant with Grady Jarrett, but he’s a rare mover for 315-pounder and there’s no such thing as too much interior pressure in a division with Drew Brees."

Defensive tackle Dexter Lawrence was rated No. 12 overall with a projection to the Cleveland Browns.

"A year ago, Vita Vea went 12th overall as primarily an early-down player," SI.com said. "Lawrence has a similar blend of mass (350 pounds) and rare athleticism, but has flashed more upside in the pass-rush. If nothing else, Lawrence would fill the run-stuffer void left when the Browns traded Danny Shelton last offseason."

Defensive back Trayvon Mullen was projected to the Los Angeles Chargers with the 28th pick.

"Jason Verrett missed another season, and the Chargers need to upgrade across from Casey Hayward with Desmond King covering the slot," he said. "Mullen has the size and speed to be developed into a top-flight corner."