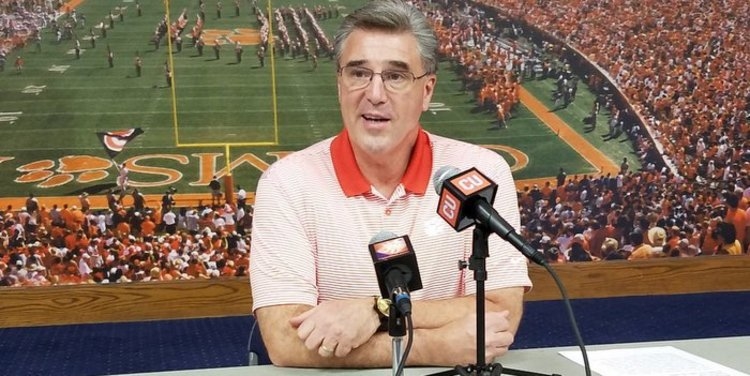 Director of Athletics Dan Radakovich and Clemson University agreed to a contract extension that runs through June 30, 2024, the university announced on Friday. Radakovich has served in the role since 2012, and his tenure has been marked by growth in a number of areas.

"Dan’s commitment to developing our student-athletes continues to result in outstanding achievements on the field and in the classroom,” Clemson president Dr. Jim Clements said. “In my opinion he’s the best athletic director in the country, and I’m excited to have Dan lead our athletic department into the future."

Radakovich was named Sports Business Journal’s Athletic Director of the Year in 2017 after the football program claimed the first of its two national championships in the past three years. In addition, men’s basketball made a run to the Sweet 16 in 2018, and head Coach Amanda Butler led women’s basketball to the NCAA second round in her first season in 2019.

“I am grateful to President Clements and the Board of Trustees for this commitment,” said Radakovich. “Certainly, their leadership plays an integral role in the success of the Athletic Department. Clemson is already among the elite nationally in a number of areas, and we’ll continue to work tirelessly to provide opportunities for our programs to achieve at the highest level, on and off the field.”

Department revenue has nearly doubled over the past six years, from $69 million in FY14 to more than $120 million in 2019. Clemson also agreed a new 10-year, $58 million partnership with Nike that spans all sports.

Since taking over in 2012, more than $180 million of capital projects have been completed, headlined by a rebuilt Littlejohn Coliseum, the Reeves Football Operations Complex, Duckworth Family Tennis Center, Baseball Operations facility and the new softball stadium, set to open in 2020.