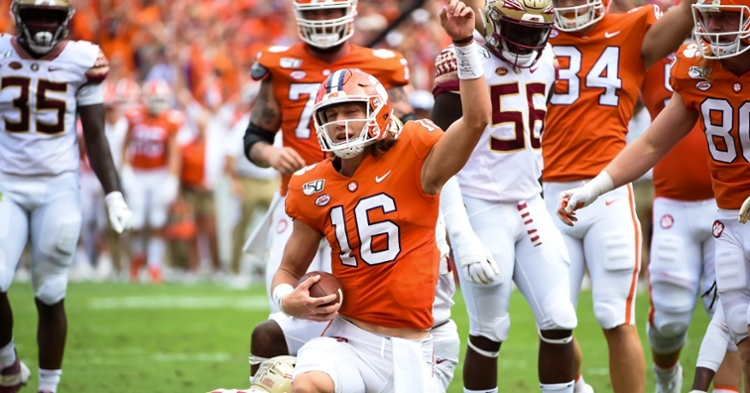 Lawrence is averaging 11.4 yards per pass with 16 touchdowns to no interceptions since the first quarter at Louisville.

No quarterback is playing better than Trevor Lawrence right now. Don't just take my word for it, that's Pro Football Focus' assessment of his recent play.

Lawrence is PFF's highest-graded QB over the last three games, where he's completed 75.7 percent of his throws for 766 yards and 10 passing touchdowns without a turnover (and two more rushing TDs).

"He's shaken off every bit of rust or preseason hype that he bought into to start the season and looks every bit like the first overall pick in the 2021 NFL Draft," PFF's Cam Mellor writes. "Still, he has now led the Clemson Tigers to commanding victories in every game since their close-victory over North Carolina as they're the odds-on, heavy favorite to win the National Championship. He would be in serious Heisman Trophy consideration had he not had the slip up in the beginning of the season where he surpassed his previous season totals of turnover-worthy passes in just three games but you can bet he's the favorite to win it in 2020."

Since a forgettable first quarter at Louisville, Lawrence has connected on 77.4 percent of his throws for 1,265 yards and 16 touchdowns to no interceptions, averaging 11.4 yards per pass attempt. He's also added a career-high in rushing yards at NC State (59 yards/TD).

Lawrence is up to No. 8 on ESPN's Heisman Watch now.

"Lawrence is slowly yet surely creeping back into the race," said ESPN's analysis. "In a blowout win over Wake Forest, he threw for four TDs (tying a career high) and 272 yards. He also had zero interceptions."

.@ClemsonFB head coach Dabo Swinney told me less is more for QB Trevor Lawrence and he's even better now than he was a year ago. pic.twitter.com/Xo7GYFXjzU