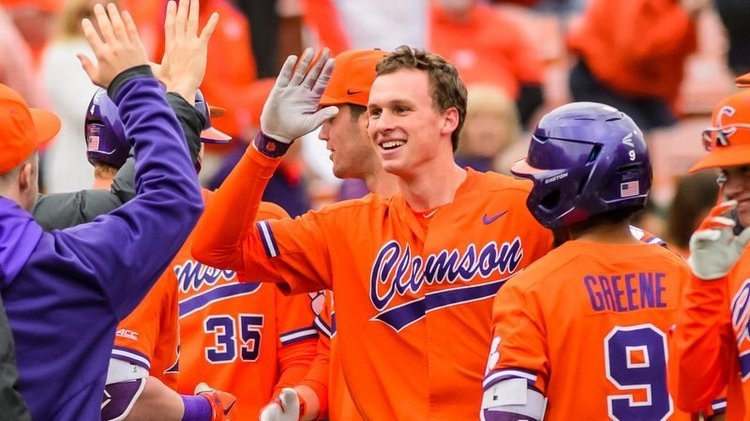 Logan Davidson hit his sixth home run of the season.

CLEMSON, S.C. - No. 12 Clemson scored six runs in the first inning and held on for an 8-5 victory over No. 11 Coastal Carolina at Doug Kingsmore Stadium on Wednesday night. The Tigers, who took a 1-0 lead in the home-and-home season series, won their fifth game in a row and improved to 13-3, while the Chanticleers fell to 13-4-1. The two teams play at Coastal Carolina on May 14.

After the Chanticleers scored a run in the top of the first inning, Clemson exploded for six runs on Logan Davidson's two-run homer, his sixth of the year, Davis Sharpe's sacrifice fly and Adam Hackenberg's three-run homer, his third of the season, in the bottom of the first inning. Kieton Rivers led off the second inning with a homer, then Coastal Carolina manufactured two more runs in the frame. Sam Hall laced a run-scoring single in the fourth inning. After a Chanticleer unearned run in the top of the fifth inning, Jordan Greene hit a sacrifice fly in the bottom of the fifth inning.

Owen Griffith (1-0) earned the win in relief, as he allowed three hits, one unearned run and one walk with six strikeouts in 3.0 innings pitched. Carson Spiers pitched the final 1.2 innings to record his fifth save of the year. Chanticleer starter Scott Kobos (1-2) suffered the loss.

B1 - Davidson hits a two-run homer, then Sharpe hits a sacrifice fly & Hackenberg adds a three-run homer! Hackenberg now has three hits on the season, all homers. ??????

Clemson-Coastal box
ONE DAY ONLY! Fanatics.com Black Friday Sale 20% off on orders over $75
Comment on this story