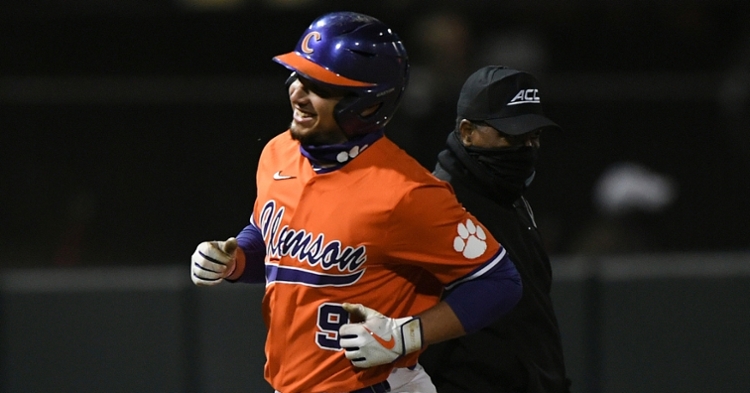 CLEMSON, S.C. - Freshmen Max Wagner and Caden Grice both hit home runs in a seven-run fifth inning, and Bryce Teodosio and Jonathan French added long balls in Clemson's 13-7 victory over Notre Dame at Doug Kingsmore Stadium on Friday afternoon. The Tigers, who took a 1-0 lead in the series, improved to 5-2 overall and 1-0 in the ACC, while the Fighting Irish dropped to 2-2 overall and 2-2 in ACC play.

Teodosio brought home the game's first runs on a two-run homer, his first of the season, in the third inning. The Fighting Irish tied the score with two runs in the top of the fifth inning. Dylan Brewer started a seven-run frame in the bottom of the fifth inning with a run-scoring single. Later in the inning after a James Parker run-scoring single, Wagner lofted a three-run homer, his second of the season. Two batters later, Grice laced a two-run homer, his third long ball of the year.

"I thought offensively our guys -- I don't know that we could've been better offensively tonight," Clemson coach Monte Lee said. "(ND starter Tommy) Sheehan gave us fits two years ago and we were able to score five runs off of him and tack on more runs after that as well...

"You look at our lineup and the thing I'm most proud of is the 6-through-9 in our order scored nine runs tonight. We had great offensive production from everybody in the lineup and we needed it. The wind was blowing out and we gave up runs ourselves. Overall, just a great way to get ACC season started off."

Notre Dame plated four runs in the sixth inning to narrow Clemson's lead to 9-6, then French responded with a two-run homer, his third of the season, in the seventh inning. Kier Meredith, who tied his career high with four hits, added a two-out, two-run single in the frame.

The series continues Saturday at 3 p.m. on ACCNX.

French goes deep! ??@frenchjonathan_ lofts a two-run shot to extend the Tiger lead! That's the catcher's third HR on the season & the fourth for #Clemson today. ????

First baseman @CadenGrice3 deposits a laser over the RF seats for his third home run in the last two games! And btw, it was 112 mph off the bat. ??