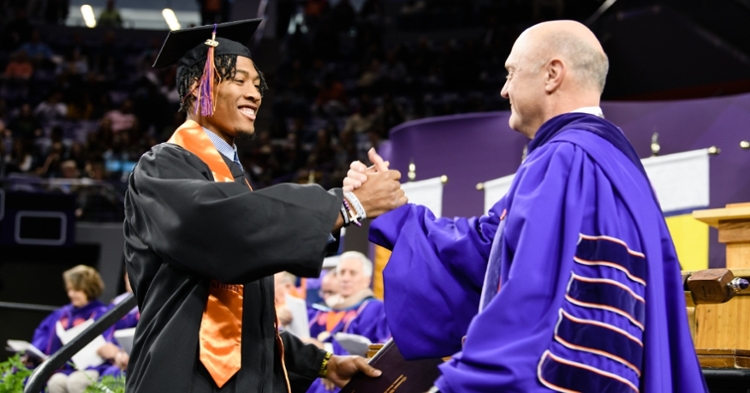 “We congratulate each of the graduates and their families for their dedication and fulfilling their commitment to Clemson University,” said Director of Athletics Dan Radakovich. “Clemson is one of the finest institutions in the nation, and this speaks to their level of hard work, the emphasis our coaches place on performance off the field and the support of the Nieri Student-Athlete Enrichment Center.”

Clemson has earned GSR scores of 91 percent or higher in each of the past six years as reported by the NCAA.

The football program saw 16 student-athletes cross the stage in the ceremony. The senior class has had one of the most remarkable runs on-field, having claimed four ACC Championships, participating in four College Football Playoffs, and are vying for a third National Championship. All-Americans Isaiah Simmons (sports communication) and John Simpson (sociology) are among those to earn degrees, while Chad Smith and Gage Cervenka each earned a second Clemson degree.

ACC Defensive Player of the Year Malick Mbaye led six members of the men’s soccer program, which advanced to the NCAA Quarterfinals this season. Goalkeeper Sandy MacIver, whose save in PKs sent the Tigers to the second round of the NCAA Tournament, earned her degree in accounting. Ansley Gilstrap, a member of the softball program’s first recruiting class, became the program’s first graduate.

D.J. Mitchell (baseball), Da’Quan Bowers (football) and Jack Metcalf (soccer) earned undergraduate degrees as part of the Tiger Trust Program. The Tiger Trust program, established in the 1980s, provides an opportunity for all student-athletes who have exhausted athletic eligibility or left early for a professional opportunity to retu­­­­­­rn to Clemson if they left the university in good standing.