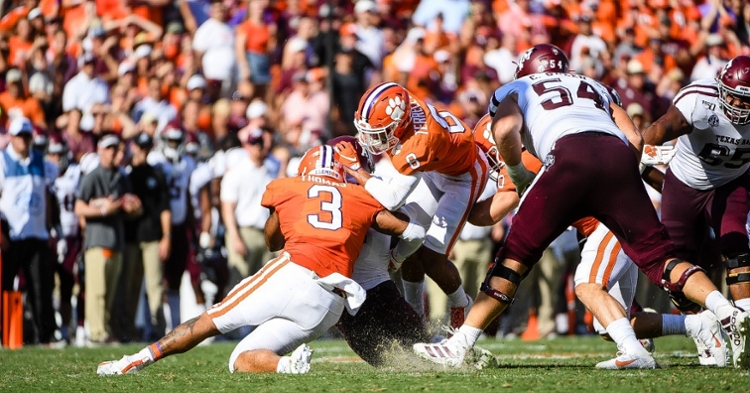 Clemson head coach Dabo Swinney met with the media following Saturday's 59-14 rout of Wofford and discussed several topics, including a few injury updates on his team.

The Tigers were able to rest offensive lineman John Simpson that has been dealing with an ankle issue.

"We held him. He was battling a little sore ankle," Swinney said. "He actually played last week. He hurt it two games ago. He ended up being able to play last week and could have played today, but we just held him."

Xavier Thomas was out for the third game in a row (concussion) and should be ready to go against North Carolina State.

"The same thing with Xavier," Swinney said. "Xavier was ready to go too. We really didn’t feel like we needed to play him, so he is chopping at the bit. He wanted to play, but I’m glad we got him back, and he is ready to go and can have a good full week of practice and get back on track."

Swinney didn't mention any other injury concerns on the team.

Defensive back Mario Goodrich did not play in Saturday's win over Wofford for being late to a team function.

"He didn’t quite get the right memo about dressing, so he was out there in pregame without his uniform, but he got it on before we came back out," Swinney said. "He was late to our dinner last night. He was kind of in my doghouse a little bit, so just didn’t play him. This isn’t the time of year to not have the right urgency in everything we do. Everything matters. Everything matters. He’s a great kid. He’s a great player, but he just has to get a little more serious about the little things."