It looks like you are using an ad-blocker. You may not have realized, but our team is mostly supported by ad revenue. TigerNet has provided free Clemson sports news for over 25 years. Help us keep doing that by turning off your ad blocker or joining our ad-free membership level. Thank you!
Go Ad-Free! Continue browsing TigerNet with your adblocker active with a monthly or annual Orange Level membership.
Allow sponsors to pay for your browsing Disable your adblocker on TigerNet and ads will fund your browsing.
Already an Orange Level member? Please Login | Need help? Contact support
BREAKING
USF transfer commits to Clemson 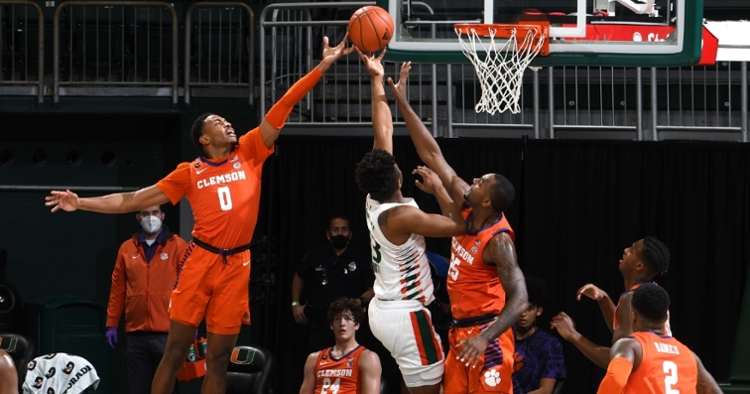 Clemson improves to 8-1 overall with the win. (Photo courtesy ACC)

Aamir Simms’ short runner off the glass with just 19 seconds remaining propelled Clemson to a thrilling 66-65 comeback victory over Miami at the Watsco Center in Coral Gables.

Clemson improves to 8-1 overall and 2-1 in the ACC, while Miami falls to 4-4 overall and 0-3 in ACC play. Simms was the only Clemson player in double figures, scoring 25 while grabbing a team-high seven rebounds and dishing out four assists.

Clemson trailed by just one point after Nick Honor’s 3-pointer with 1:05 remaining, but a Miami turnover led to Simms’ shot. Simms’ dribbled his way into the lane and tossed a soft shot off the glass to give the Tigers the lead. The Canes were setting up for a final shot, but Honor stole the ball from Miami’s Kameron McGusty and Jonathan Baehre dribbled down the court and had the ball knocked away as time seemed to run out.

After a review, three-tenths of a second was added back to the clock but the Canes were unable to convert the shot.

The Tigers started off hot. Simms nailed a 3-pointer off of a Miami turnover to start the game, and a 3-pointer by Chase Hunter at the 12:41 mark of the first half, followed by a hook shot from Hall, gave the Tigers their biggest lead of the half at 21-9. Miami began to chip away at that point as the Tigers’ hot start turned cold.

Miami started their run on a pullup jumper by Kameron McGusty that made it 21-13, but the Tigers kept a working margin and Alex Hemenway’s 3-pointer at the 5:43 mark gave the Tigers a 30-22 lead. Miami then went on a 12-2 run to close out the half and led 34-32 at the break.

Simms immediately tied the game with a layup coming out of the break, but the Canes quickly nailed a 3-pointer by Harlond Beverly to go back up 37-34. Elijah Olaniyi added a layup and Miami led 39-34. The Tigers roared back after Hemenway nailed a jumper and then a 3-pointer that helped propel the Tigers to a 42-21 lead. The teams then went back-and-forth over the next several minutes before free throws by Simms and Honor gave the Tigers a 59-55 lead with just 5:31 left on the clock.

Earl Timberlake hit a 3-pointer for the Canes that made it 59-58, but Clyde Trapp drove the lane and laid a left-hand off the glass to put the Tigers back in front by three at 61-58 with 4:57 to play. The Tigers forced a stop and had a chance to extend the lead, but Trapp’s wild shot glanced off the rim and McGusty was fouled by Honor on a made layup. He hit the free throw and the game was tied at 61-61 with just over three minutes to play.

Simms’ shot in the lane bounced all over the rim but fell out and Miami turned that into points on the other end and led 63-61 with 2:05 remaining, forcing Brownell into a timeout. Clemson missed another shot out of the timeout and Isaiah Wong hit two free throws that made it 65-61 Miami.

Clemson missed a long shot by Al-Amir Dawes grabbed the rebound and kicked it to Honor, who drilled a 3-pointer from the corner that made it 65-64 with just 65 seconds left to play.

The Tigers return to action Tuesday when they host NC State at 7 pm in Littlejohn Coliseum (ACC Network).

"This was certainly a hard-fought win. Our guys approached this game well. For the first 10 minutes, we played at a high level. It took us a little while to adapt to Miami's defensive adjustments. In the second half, we did much better."

"Nick [Honor] made a huge shot. Aamir [Simms] was fantastic. He was able to find a way to score that final basket. Clyde [Trapp] driving the floor was important. We drew some fouls, made some big plays and gutted out a win."

"We knew we would have opportunities to shoot threes. We just wanted to make sure our guys took good ones, and we found more ways to do that in the second half. We had a good mix of offense and played much better against Miami's defense in the second half, and that won the game for us.”