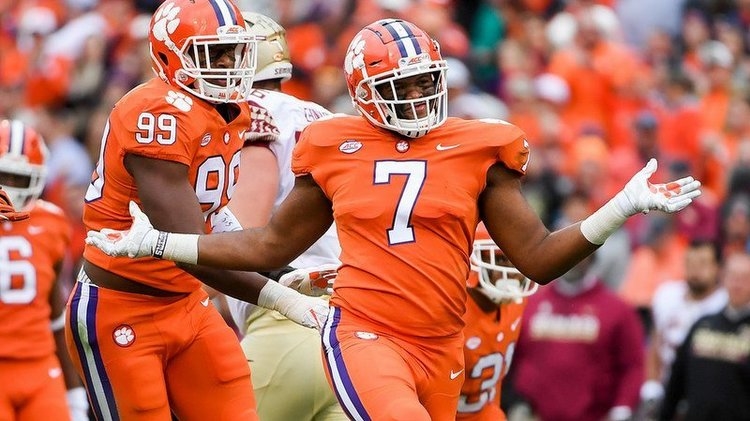 Defensive end Clelin Ferrell was projected to the hometown Carolina Panthers at pick No. 16 overall.

"The Panthers didn't get to quarterbacks in 2018, and although they could address it in free agency, there is a hole at defensive end," McShay said. "Ferrell shows high-end physical tools and quick hands, which helped put him in the top 10 in the nation in both sacks and tackles for loss in 2018."

Defensive tackle Christian Wilkins was projected to the Cleveland Browns at pick No. 17.

"Sure, the Browns have some other areas of need, but this value is too good to pass up, especially with Trevon Coley and Carl Davis headed toward free agency," McShay said. "Wilkins is one of the top 10-12 players in the draft class. He is scheme-versatile, and Cleveland would love his high awareness and motor in the middle of that defensive line."

Defensive tackle Dexter Lawrence was predicted No. 25 overall to the Philadelphia Eagles.

"It's no secret that the Eagles want a cornerback, but this is some really, really good value," McShay said. "Put Lawrence next to Fletcher Cox and let those two plug the middle of a line that was in the bottom third in rush defense this season."

Cornerback Trayvon Mullen was predicted to the Indianapolis at pick No. 26.

"Indy could use a receiver, but the secondary is a bigger need," McShay said. "Mullen, a long and lean corner, had four interceptions over the past two seasons with the Tigers and would help shore up the Colts' middle-of-the-road pass defense."