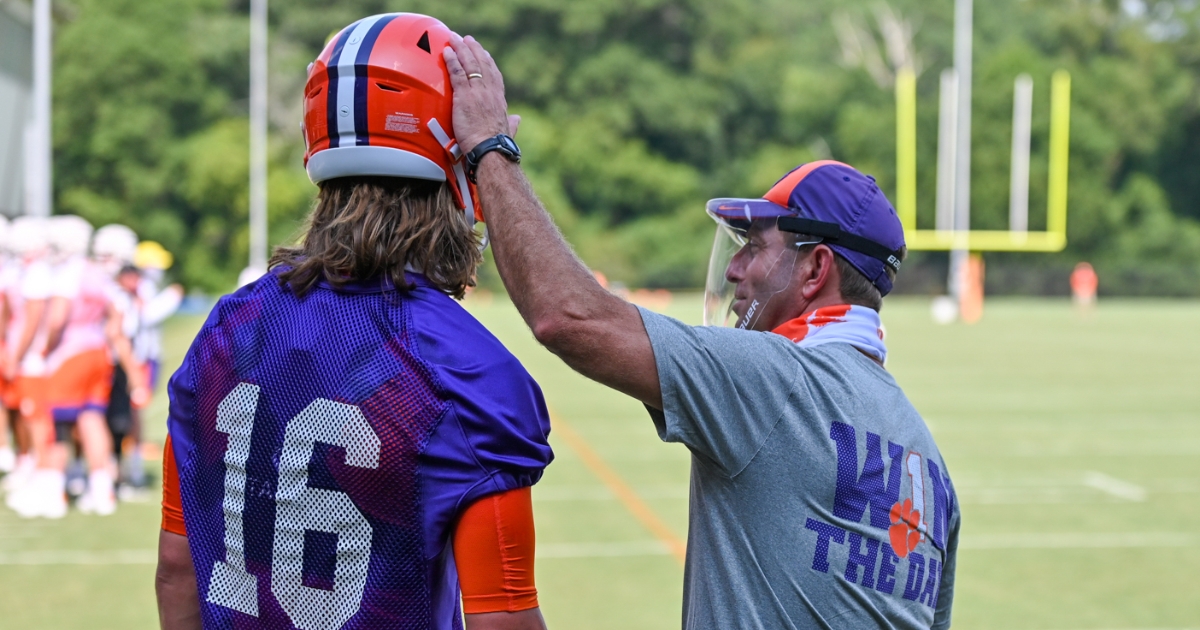 One former NFL GM says these two could team up in the pros? (Photo per Clemson athletics)

The scenario? The Jaguars, who seem to be shedding players in an effort to tank the 2020 season, go after Dabo Swinney as head coach and pick Trevor Lawrence No. 1 overall in 2021.

"There's a lot of speculation in the league that Dabo Swinney, who has been on the short list of multiple head coaching searches, could be a coach that teams want to talk about and this would really be the perfect storm ingredient," Tannenbaum said on ESPN's 'Get Up' Monday. "Here's why, he's immensely popular in that area of the country, and if he could go with Trevor Lawrence, from Clemson right down the road of Jacksonville, with all those picks and all that cap room -- that's the ideal situation and I know when talking to a number of NFL general managers -- they see Dabo Swinney in the same mold of (former USC and current Seahawks coach) Pete Carroll.

"A high-energy guy -- Pete Carroll's been a head coach in both college and the pros. If Dabo Swinney, and that's a big if -- if he was going to do it, this is the perfect situation because in light of moving on from Leonard Fournette now -- they just don't have a lot of playmakers...The biggest story out of this is if Dabo Swinney would ever go, this is the perfect storm to do it within this season."

Swinney addressed why he's stuck with a college route so far earlier this year.

"As for coaching in college, that is all I have ever done, number one," Swinney said. "I've had opportunities to coach at the NFL level. In fact, I've had two or three opportunities. But I've chosen to stay put because I love the 18-to-22-year-olds. I kind of have a PhD. in that group. I've been one, and I've spent my whole life with those 18-to-22-year-olds and I love the impact I am able to have on that group of people and it's just a lot of fun. I love it...

"I love the pageantry of college football. I love recruiting. In college football, you get more than one first round draft pick. You can go sign as many as you want. In the NFL they give you one. But at the college level, I have more control of my success. In the NFL, you have so many cooks in the kitchen, from the owner to the GM to the player personnel guy to the scouting guy. And so this has been a great fit for me. But I always say 'never say never.'"