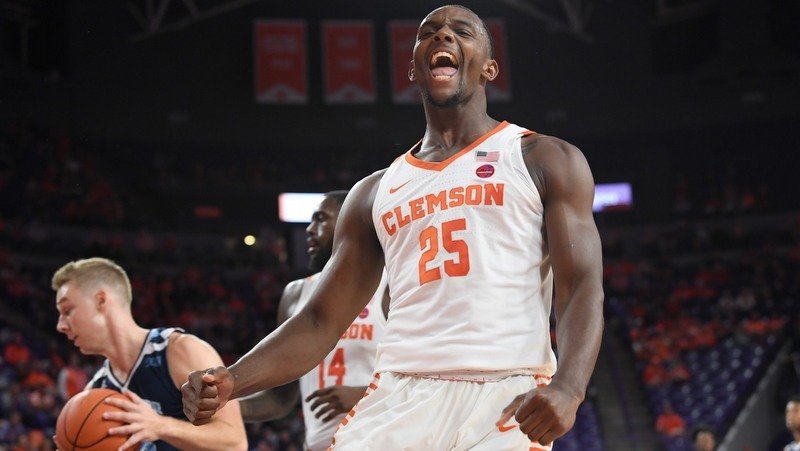 Some hot shooting early and smothering defense pushed No. 22 Clemson men’s basketball to a 2-0 start with a 71-51 win over NC Central Friday.

NC Central was held to 27 percent shooting in the first half to a 40-20 deficit, with five of those attempts blocked. New contributors in big men Javan White and Hunter Tyson each scored six points in the period. White finished with seven points, six rebounds, two blocks and a steal, while Tyson added three rebounds, a block and a steal to his point total.

David Skara and Aamir Simms led the Tigers in scoring in the first half and were in double-figures early into the second half as Clemson extended its lead to as much as 28 points. It was a second-straight game in double-digits scoring for Skara, who totaled 16 for a Clemson career-high. Simms posted 14 points, three rebounds, three assists and a block and senior guard Shelton Mitchell joined the duo with 11 points and four assists.

NC Central was held to 33 percent shooting on the night, giving up 20 turnovers. Clemson shot 46 percent, knocking down 10 3-pointers.

NC Central represented the MEAC in the NCAA Tournament over the previous two seasons.

The Tigers opened the season with a 100-80 win over the Citadel on Tuesday.

Clemson stays home for the next one on Wednesday versus Sam Houston State (7 p.m.).

“We got better this week.”
- @Coach_Brownell

Notes: Clemson starts 2-0 for the 16th time in 17 seasons … Clemson moves to 2-0 all-time against North Carolina Central … Clemson also moves to 36-1 all-time against programs from the Mid-Atlantic Conference … the 20 points allowed in the first half was the second-fewest allowed by Clemson in the last 61 games … Clemson assisted on 78.3 percent of its field goals … Clemson forced 20 turnovers for the first time in 23 games dating back to the Louisville game on Jan. 6 (21 turnovers forced in OT) … the last time the Tigers forced at least 20 turnovers in a non-OT game was Dec. 9, 2017 against Samford … Brad Brownell wins his 151st game at Clemson and is now just five wins shy of tying Bill Foster for second all-time in Clemson history … David Skara led the Tigers with 16 points – his most as a Tiger … 16 points for Skara is also his most in a game since Nov. 19, 2014 (his third career game at Valparaiso) ... Skara made five 3-pointers all last season and through two games has made four in 2018-19 … Aamir Simms posted three double-digit scoring games all last season and has now scored in double-figures in back-to-back contests to begin this year … Simms also tied his career-mark with two steals … Shelton Mitchell and Marcquise Reed combined for nine assists on the night – one more than the entire NC Central team (8).