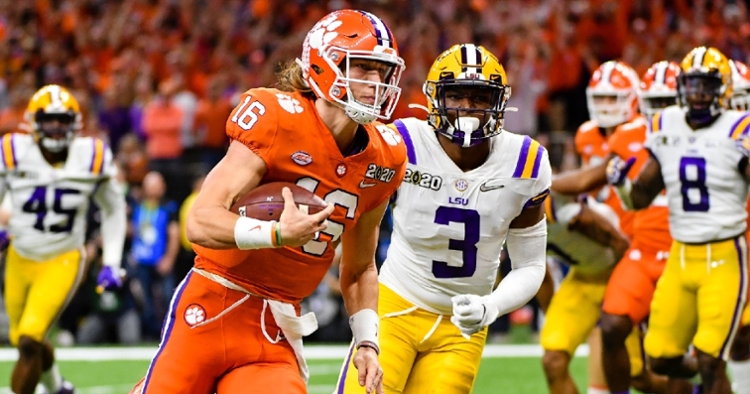 Clemson is projected to have another top-5 offense.

There's a familiar name at the top of ESPN's SP+ preseason college football rankings. Just not the team likely to take the preseason top spot in the traditional polls.

The latter would be Clemson, coming off of a fourth national title game appearance in five seasons, which is armed with some of the top offensive talent nationally and the defensive tactician who is Brent Venables. The SP+ favorite, however, is Alabama, followed by Ohio State and then the ACC's Tigers. The Crimson Tide are projected to have the nation's top offense and also a top-10 defense (8).

Ohio State is expected to have a top-5 unit in both phases (No. 3 offense/No. 5 defense), while Clemson is projected a No. 4 offense and No. 13 defense. Venables' group has finished no lower than sixth in the SP+ defensive rankings since 2016.

Clemson was No. 2 preseason in the SP+ last year to Alabama, while LSU was two spots ahead of its AP preseason ranking of No. 6.

Advanced metrics weigh almost solely the efficiency of a team in all three phases by game, and therefore can provide some head-scratching final rankings because wins and losses aren't the factor they are in traditional rankings

After Clemson's title seasons in 2016 and 2018, Dabo Swinney's group was ranked second (behind Alabama) and third (behind Alabama and Georgia), by the SP+ metric respectively.