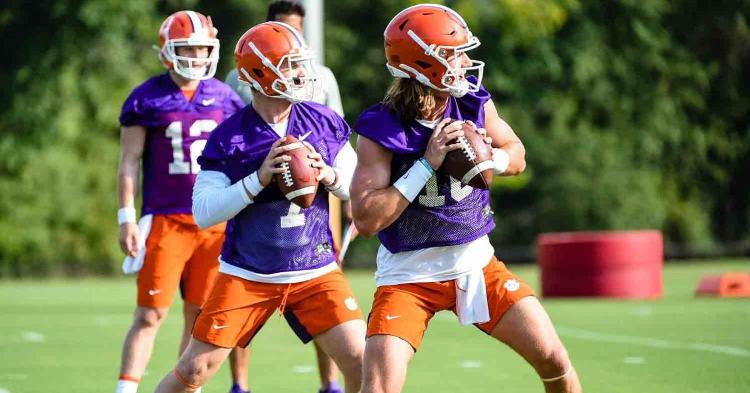 Clemson opens camp with freshmen and sophomores comprising 80 members of its 120-man roster.

CLEMSON, S.C. — Less than four weeks away from its season opener, Clemson hit the practice fields at the Allen N. Reeves Football Complex on Friday for its first practice of fall camp.

Per program custom under Head Coach Dabo Swinney, players and coaches were greeted by the sound of Thin Lizzy’s “The Boys Are Back In Town” over the speakers as practice commenced. The soundtrack was befitting a group excited to return to work and take the next step in its 2019 journey.

“This is always just so much fun to get back on the field doing what we love to do,” Swinney said.

Clemson enters the season ranked atop the Coaches Poll released by USA Today on Thursday, a first in program history. But for those claiming that Clemson has now become “the hunted” in college football, Swinney contends Clemson has been targeted for opponents’ best shot for a while now.

“That’s just kind of business as usual. We’ve had eight 10-plus-win seasons in a row. Every time we show up to play, that other team wants to beat us,” Swinney said. “That’s not anything new this year. So for us, we have a process we go through every year, and it doesn’t start now, it started back in January. We’re just entering a different phase of our journey for this 2019 team.”

Clemson opens camp with freshmen and sophomores comprising 80 members of its 120-man roster. But though Swinney has called his 2019 squad young, it’s a group that received the benefit of quality experience a year ago as Clemson led all AP Top 25 squads by averaging 72.5 players per game.

Amidst that group of 80 freshmen and sophomores is quarterback Trevor Lawrence, who returns following a 2018 true freshman season that saw him earn Freshman All-American status, the Archie Griffin Award and ACC Rookie of the Year among numerous other honors. Following the session, Lawrence was asked about areas in which he’s seen growth from himself and the team.

“I think just confidence from having a year under my belt and also just getting to know all these guys,” Lawrence said. “We’ve grown really close this offseason [and] this summer. Getting out here in camp, that’s what it is about is growing together, and I feel like we’re doing a really good job of that. First day out here on the grass and I thought we had a good day.”

Clemson will open the season at Memorial Stadium against Georgia Tech on Thursday, Aug. 29, marking the earliest opener in the calendar year in the program’s 124-year history. The contest will be the first live football game broadcast on ACC Network, which launches on Aug. 22. Fans are encouraged to visit GetACCN.com and the ACC Network FAQ on ClemsonTigers.com to ensure that their cable providers will carry the network.